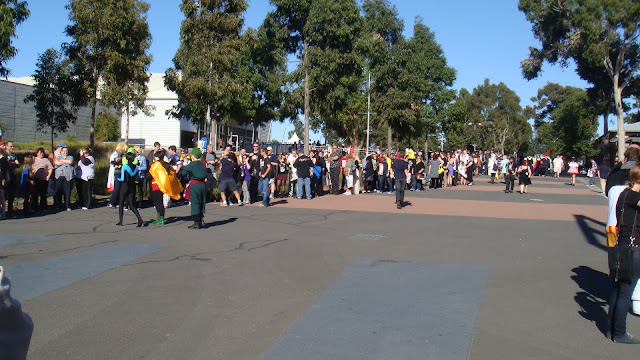 Last Sunday, the geek in me went out and headed to Supanova Pop Culture Expo. I had only decidedthe night before that I was going to go. I went last year, but all my friends bailed on me this year (due to all of us not finding out about it until that same week). I was up at 6am - got the train before 7am and got to the gates at 8.30am. I was about 10th in line but didn't realise that I was in the pre-paid ticket line. Luckily the lovely guy beside me saved my spot (thanks Ryan! I owe you so much!). I lined up in the ticket buying line before being able to jump to the front of the queue where my spot was saved.

So as soon as I walked in, I rushed to the store and bought my token to get my photo taken with the twins. I was third in line in the photo queue. I stayed in the queue for an hour chatting with another Harry Potter fan (the lovely Bridie) before finally getting my photo taken. I didn't have time to collect it because I had to rush over to the first seminar. I enjoyed seeing the preview to the new project that Rainbow, Jewel Staite and David Hewlett (LOVE LOVE LOVE HIM!) are working on. He also said he was grumpy and just like his character - which makes me love him even more!

Rainbow spoke about how he did a convention somewhere in Oklahoma (3rd fattest town or something) and they gave him trays and trays of food for lunch! Also that his stunt coordinator knocked him out - someone tweeted him and got a tweet back. He said it's cool to act like someone on drugs - because drugs are cool, fun or something ... dunno.

Cliff said the weirdest thing a fan had ever given him was something that a fan had gone to a lot of thought and effort to make but it smelt really bad so they kicked it into the bin.

They said that celebs are always more popular out of their own country. They spoke about how David Hasselhoff always says how popular he is in Germany. But when Cliff asked Germans what they thought of the Hoff, they said they don't know why he says they all adore him. Cliff also spoke about how horrible it is to go through customs here - took him 2 hours - he thought Melbourne would be better than Sydney but it wasn't. Rainbow said that he was stopped every time to do all the random airport tests IE drugs, bomb etc. He also said that he's popular in Italy.

I missed the start - maybe the first 5-10 minutes - but it ran overtime (good, in one sense, because it means more information, but bad when you have to run off to get to the next seminar)

I rushed over to see Wil after the seminar. I was late. The room was already packed by the time I got there. I snuck in the back and tried to pay as much attention as possible but he's very geeky and some of the things he spoke about, I had no idea what he was talking about. So sometimes my mind wanded. I'm not a big gamer or Trekky or anything like that so it was hard for me to sometimes concentrate. I've also never sat through a full episode of The Big Bang Theory.

I only knew him from Toy Soldiers but I needed to kill time inbetween and I thought he would be interesting so I decided to go along to this show. He spoke about Patrick Stewart, Big Bang, Melbourne Trains, his scroll in St Kilda/Brunswick, how stupid Americans are (his words, not mine) and more (will write more if I remember!) Those were the things that were more general and I could understand them. (by the way, I adore Patrick Stewert - Picard forever and all that).

After seeing Wil, I left the room and had to line up in a HUGE line for the twins. I ended up sitting in about the centre of the room so my seats weren't the worst - but weren't the best either.

The James and Oliver show was fun - there were so many random questions. My favourite by far was the chick who said "I'm 19 and I've never been kissed, will you be my first?". Classic. Close second was the chick who asked if they'd like a donut. Oliver declined but James said he would later. Other little bits of information: James called himself a ranga last time he was here because they don't use that term in England (means redhead just FYI). They talked about pranking Rupert, Twilight, working with Rob Pattinson, getting the roles, days on set, good genetics, getting their roles as which twin, favourites and other bits and pieces. James brought up penguins a lot. I wish I could remember more, I do.

After seeing the twins, I went back into the main room to collect my photo. That was a fun experience - not! The woman was really rude - I would go far as saying she was a bitch to me! - so it kind of put a damper on the whole experience.

After collecting my photo, I went to take some photos of the other guests but a lot of them were at lunch so I never got the opportunity to do so. It was around 2pm at this stage and I hadn't eaten all day; so I decided not to wait for the actors to return from lunch and I left.

All up it was a good day. I found out later that one of my friends was actually there so I could have gone with him - but he stayed all day so our schedules probably would have clashed. But maybe next year ... only if someone I like is there and actually worth seeing *coughDavidHewlettcough* :) 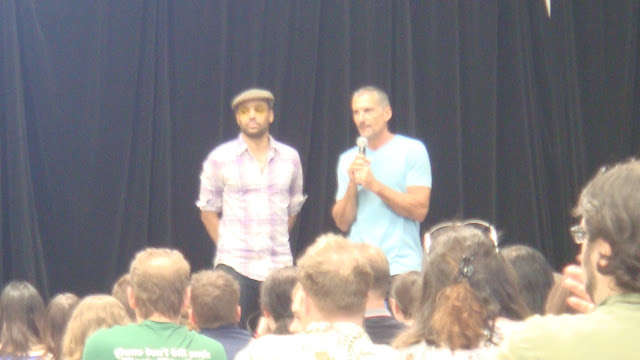 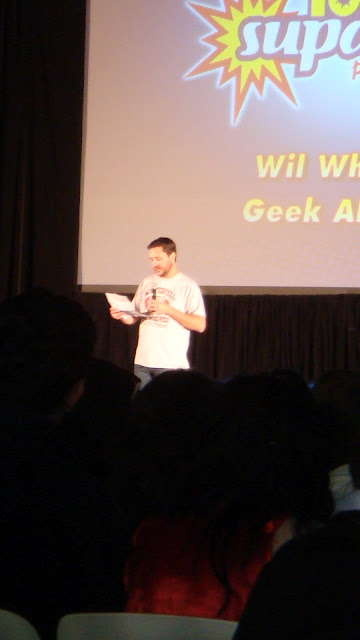 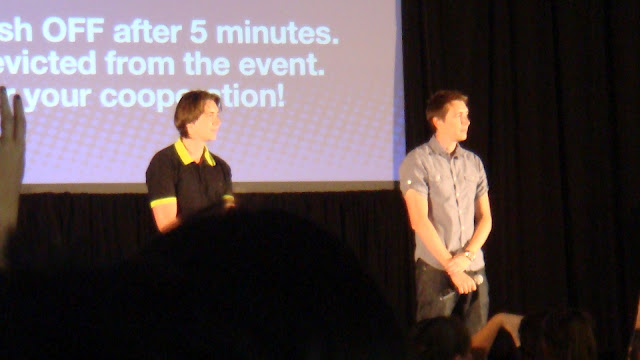