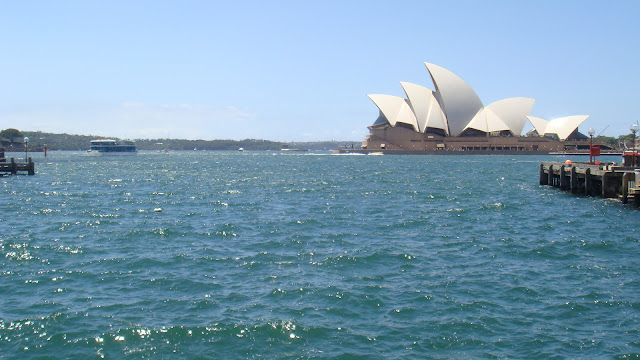 We had our Sunday planned out quite well. We were going to The Rocks market in the morning, sight seeing after that and then to see Legally Blonde in the afternoon. 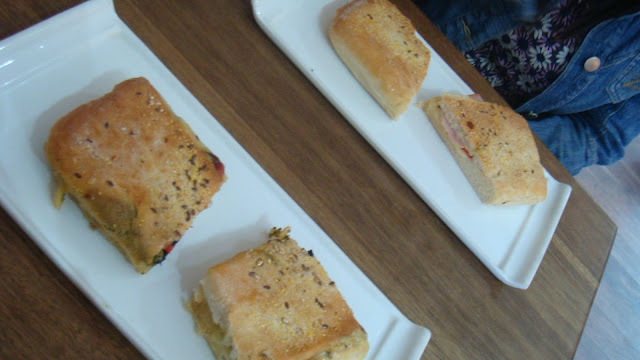 We stopped for brunch in a little cafe along the way to the market. I wanted a salad from this cute french place near the markets but they didn't serve lunch until 11.30 so we decided to eat elsewhere with every intention of going back for salad later - sadly we ran out of time ...

After eating, we checked out the market. I was mainly there to buy dried fruit from a market stand there - but sadly it wasn't there this time so I was unable to purchase it. There was a lot of other cute stuff - especially this cute little pig ring which I had liked the day before in Paddington. I told the guy that I had liked it yesterday and he looked at me and nodded as if to recognise me - even though I knew he was faking it. We didn't end up buying anything. I liked this plate/mug combination for a Christmas present but I decided that it would have probably broken if I had tried to get it home :\ 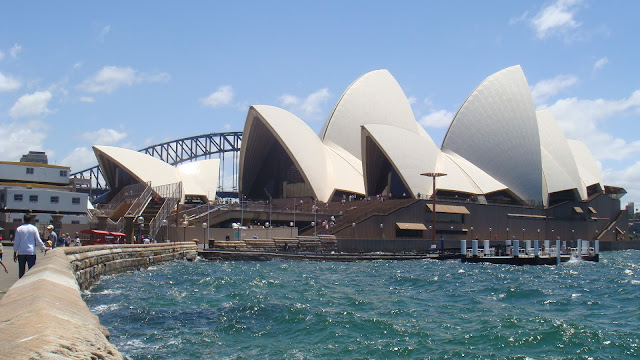 After the market, we walked to the Sydney Opera House for photos. It was so incredibly windy - check the water - so it was really hard to get anything good. We managed to get one in front of the Harbour Bridge but only one :\

I've always wanted to go to the Royal Botanical Gardens. Every time I've been to Sydney, I've seen it on the map but I've never had the opportunity until last weekend. I was disappointed as I expected lots of flowers but there was none that I could see ... 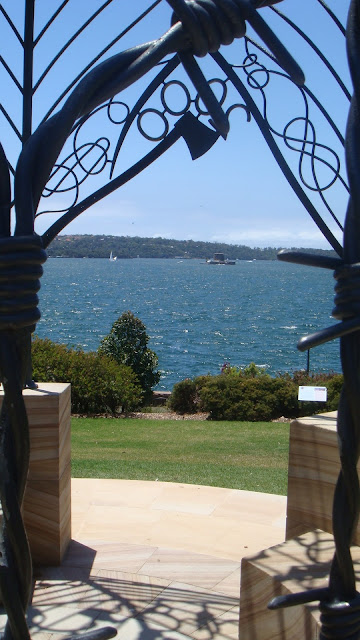 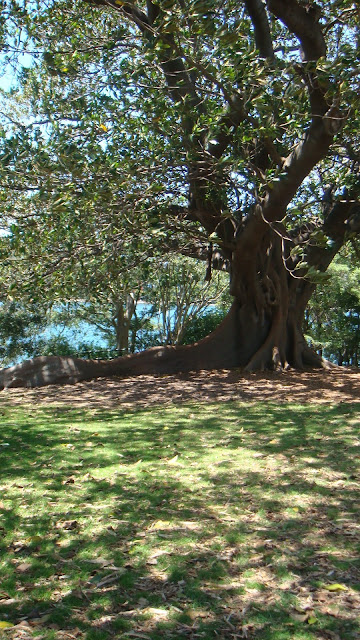 After back tracking through the Gardens, the Opera House and The Rocks, we had to make our way over to the Lyric Theatre for Legally Blonde - The Musical. 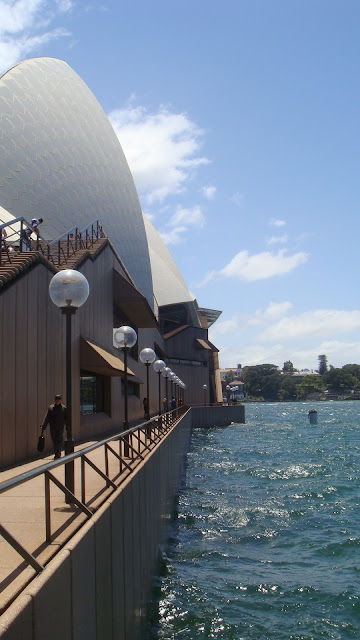 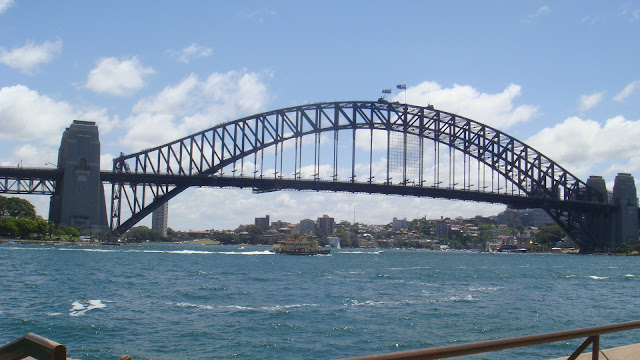 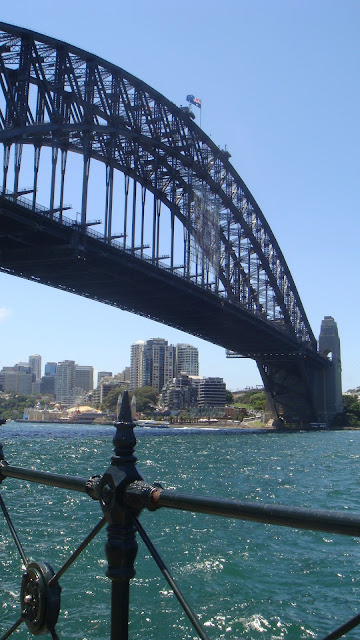 Once again, we got lost along the way and ended up right where we started from so we took a cab. And then we got lost trying to find the stage door. We managed to find it in the end but it seemed like we were getting lost wherever we went. Still, I wasn't going to miss my opportunity to meet Cameron Daddo. I've been a fan of his ever since FX. 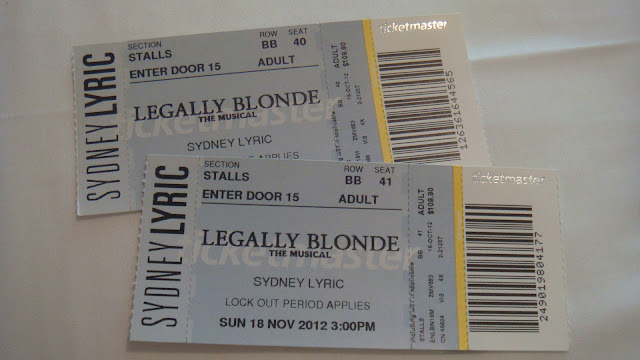 The biggest surprise to me was how much I liked David Harris' performance of Emmett. When the show began I thought for sure that they had cast the part wrong. He was all scruffy and not as I had pictured. I'm also slightly biased because I love Luke Wilson's performance in the movie. But anywho, it didn't take long for me to be swooning over Emmett once again. My favourite line - 'Little miss Woods comma Elle'. The makeover - or Take It Like a Man - was very sweet - and my friend and I couldn't help but smile when we got a full shot of his green and black undies, lol. But who am I kidding, he had me at Chip on my Shoulder.

I didn't realise that I'd seen him in Fiddler on the Roof until I checked my program. I don't remember the show too well - which is a shame, because I know I enjoyed it. I own the movie but it's not the same. And considering my family's history, I should really remember it :\

My favourite song, however, was Legally Blonde. Actually, after I downloaded the album, this song had me in tears. It's just a beautiful beautiful song. Gay or European has the best dance moves - and I loved the kiss! I didn't think they'd do it but they did. It was actually a lot more sexual then I thought the show would be -- 'Oh, oh, oh, much better', 'that's because you're a slut' and there was something about a whore in there too.  OMG, you guys! was the song that was stuck in my head days afterwards - probably didn't help that I downloaded the album as soon as I got home either.

I did also like Cameron Daddo's Blood in the Water. What a cruel man. I've said this numerous times in my order musical reviews, but for me personally, I love a song with emotion behind it. I think it's an art form in itself. I believe getting that emotion in a recording takes a lot of skill - perhaps that's why I appreciate Anthony Warlow's Jekyll and Hyde so much because the emotion is really there. BUT regarding Legally Blonde, when Cameron tells Elle to get out on the classroom, I loved the emotion in that part of the song. I was in pure awe and amazement of his performance.

Erika Heynatz surprised me. I didn't know that she was such a good dancer and singer. I was impressed.

I didn't understand the part about Ireland. I thought it was unnecessary to the story. Bend and Snap was my least favourite song. I also thought that Elle was somewhat dumbed down. In the movie she's determined and works hard after the bunny incident. In the musical, I feel like they tried to make Elle seem less intelligent. It's hard to explain but I felt like she was two characters. There were moments when she was like the movie character which suited the story and other times, I thought that they made her seem ditsy for the sake of it which I don't think it fit. For example, when Emmett goes over to the her room and she hasn't opened a book, she's failing and she gets kicked out of class every day. I didn't believe that to be true. I also thought that Warner was made to be less of a joke - I always compare him to Jerry O'Connell's character in Can't Hardly Wait. He's the stud who becomes a joke. It wasn't so in the musical. I also didn't like that they removed the female teacher - I can't think of her name - and made Vivienne take over her role in a sense. I didn't think it fitted. I didn't like that Elle proposes to Emmett either - but I'm an old fashioned girl and I think the guy should do it lol. Also, don't get me started on the bathroom/shower scene ...

I know I'm just getting picky and comparing the two - but I really did enjoy the musical. It was actually one of the best I've seen. Although, I am still biased towards Cats as it was my first. And I loved Oliver! when I saw it. And nothing can beat The Pirates of Penzance movie for me. It's just so good!

I thought Lucy Durack was the perfect Elle. She plays sweet and bubbly so well. I saw her in Wicked in 2009 but I can't remember her performance or the show very well. Rob Mills also did a good job. He dropped the ring during the proposal scene which was a little funny, I must admit. I liked his rendition of Serious. We had an iPod dock in our room so we were listening to his Up All Night album that morning to get us into the spirit.

After the show had ended, we headed to the Stage Door to meet the cast. There were so many people around looking confused, so when they began to follow us, we felt like we were leading the way for all the people who had no idea where they were going. It pays to find it ahead of time people - though it annoyed me that they told everyone to come to the stage door. I've never been to a show where they've said that. I don't like big crowds as you have so little time to chat. I've been to so many stage doors that I know what to expect so when everyone stood behind the red rope, I knew the perfect place to go to get photos.

David Harris was first out. He was very sweet and polite. I didn't know what to say to him so I gather I just said thankyou and not much else. Some others came out after that but  not people who we were interested in getting our photo with. Next was Rob Mills. I told him that I was glad that he was there today because at Wicked his understudy was on so I got my photo taken with Bert Newton (by the way, get well soon Bert! x). He said something how he didn't miss many days and how I should have saw the show again. I replied something like about coming all the way from Melbourne again. To which he said that it wasn't too far. Anywho, my photo blurred so I had to go back for another one - in the other one I look drunk so they are both bad and won't be shown to anyone lol. When I was taking the photo for my friend, he kept talking to somebody so I had to wait for him to stop - but he photo is adorable. If you didn't know who he was, you'd think they look like a couple. It's a great photo, if I do say so myself =P

After Rob, Cameron came our way. Being as he's older and, with most of the crowd being young teenagers, not realising what a big star with a huge amazing career he has had and what a big deal it was to have him in the musical, most people left him alone, it was easy for me to go and grab him. I only wish I would have told him about how big of a fan I was of FX. Maybe it would have made his day - I'm not sure ... But he was so lovely and my picture with him is so adorable - our faces are touching ... okay, small fangirl moment over ...

After meeting David, Rob and Cameron we left as we didn't need to see anybody else. We made our way to The Star and into the casino. We wanted to go to Cherry (it's a bar), but being a Sunday afternoon, it wasn't open. We made friends with one of the security guards - had to do with our ages - we asked if there was anywhere good to eat but with no luck, we decided to leave and return the next day.

For some silly reason, we asked where Anzac Bridge was instead of Pyrmont Bridge so although our directions were correct, we headed in the complete opposite direction of where we wanted to go. It actually turned out to be a blessing in disguise because we managed to find the fish markets - where we were planning to go the next day. After realising we were heading in the wrong direction, we decided to back track and try and, funny enough, we ran into Cameron Daddo at the pub along the way =D

We didn't end up eating until 8pm after walking around for oh so long. We decided on Japanese (we didn't have much choice as most places were closed already) on the top level inside the Galleries. Our waitress was lovely. I asked for no soup and she thought I said no sauce. We had a bit of a laugh. 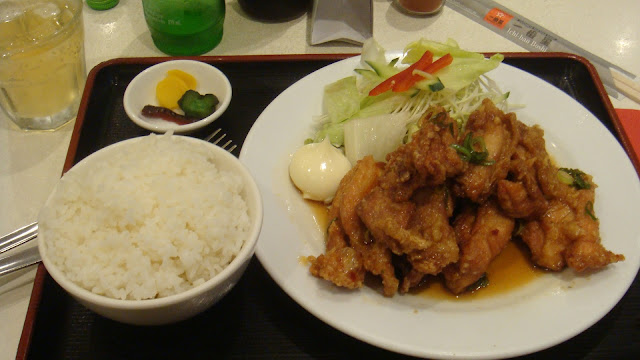 We arrived back to the hotel rather late - and our feet were killing us! - but it was a great day. We ended up watching Abraham Lincoln: Vampire Hunter before bed. If you don't think about how silly the story is, it's actually a pretty good movie.

Have a good weekend everybody!