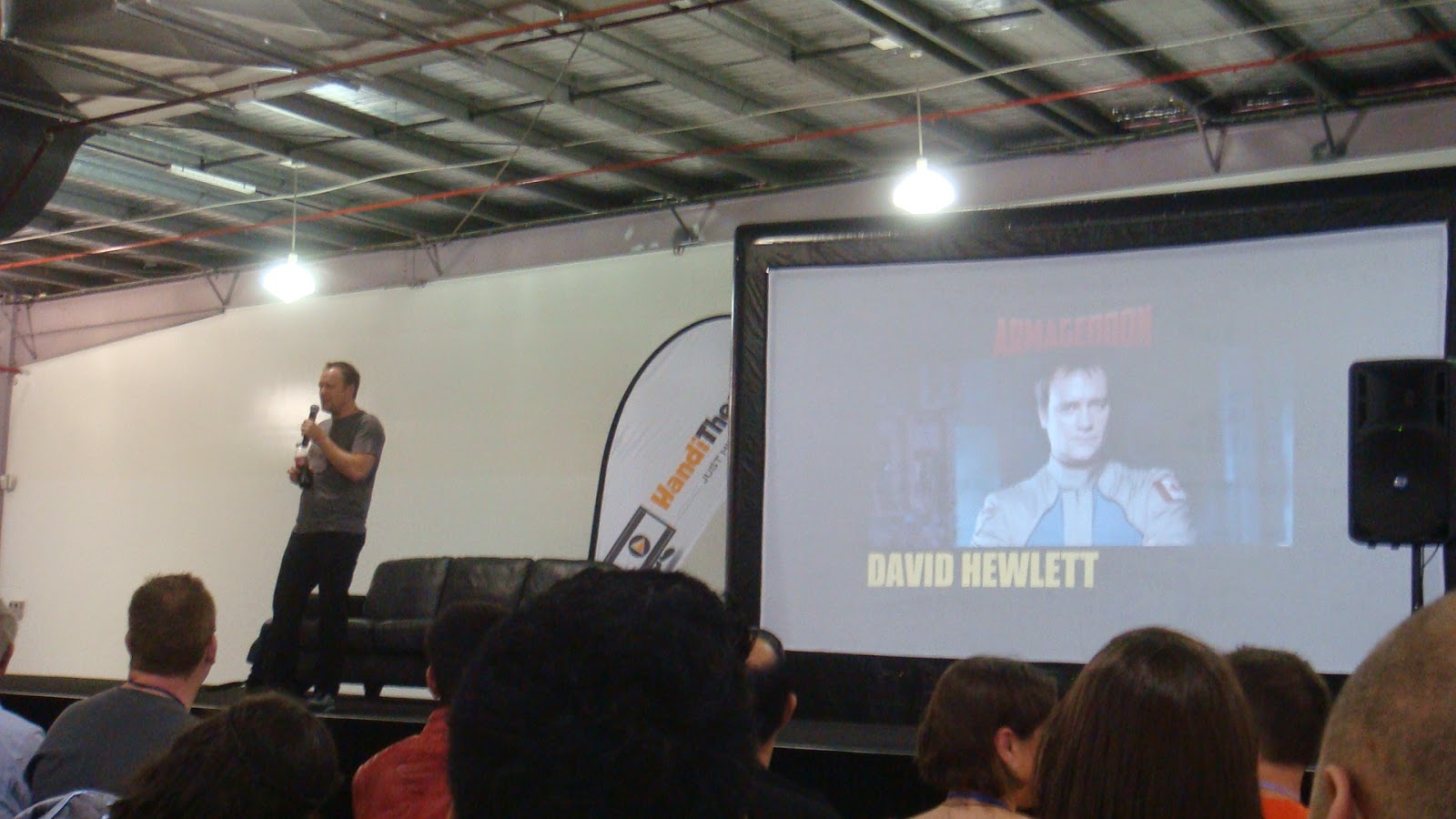 Sunday I attended my first ever Armageddon convention. My main and only reason for attending this year was to meet David Hewlett (and to see the screening of his new movie Debug). I have waited ten years to meet him. I am such a fan of his work.

I think I've seen about 1/2 of his work including when they dressed him up as a lesbian and he got his arse kicked by Jerry O'Connell (My Secret Identity), that weird show where he gets fried by a vampire night thing (Forever Knight), long haired country music star who has the most awkward sex scene in the history of movies I've ever seen! (Ice Men) etc. Actually, to be fair, I should actually list them all. I have seen: State of Syn, Rage of the Yeti, Rise of the Planet of the Apes, SGU: Stargate Universe, Hellcats, Splice, The Closer, Stargate Atlantis, Sanctuary, A Dog's Breakfast, Stargate SG1, Darklight, Ice Men, Boa vs Python, Without a Trace, Mutant X, Nothing, Cypher, ER, Treed Murray, Century Hotel, The Triangle, Traders, Nightworld: Survivor, Cube, Kung Fu: The Legend Continues, Shining Time Station, Clutch, Forever Knight, Scanners II, Desire and Hell at Sunset Motel, The Campbells, Where the Heart Is, My Secret Identity and Pin.

I've said before how I have never not done everything I've wanted to do at a convention, well this is the first one that didn't go my way. Looking back, I should have arrived earlier but it is what it is so any who, here is my write up of Sunday's Armageddon featuring David Hewlett, David Nykl and the screening of Debug (hashtag #DebugMovie on twitter)

Please note: I am going off memory so some details may be incorrect. Sorry.

I was hoping to have some time to walk around a little more but buses were replacing the trains, then there were problems on the city loop so I ended up getting to Flinders Street, going backwards and having to go back to Flinders to change to another train before changing for the Showgrounds train. So granted to say, that by the time I got there, I didn't have as much time as I would have liked to. I quickly bought a ticket and photo token and headed to David Hewlett's panel at 1pm. 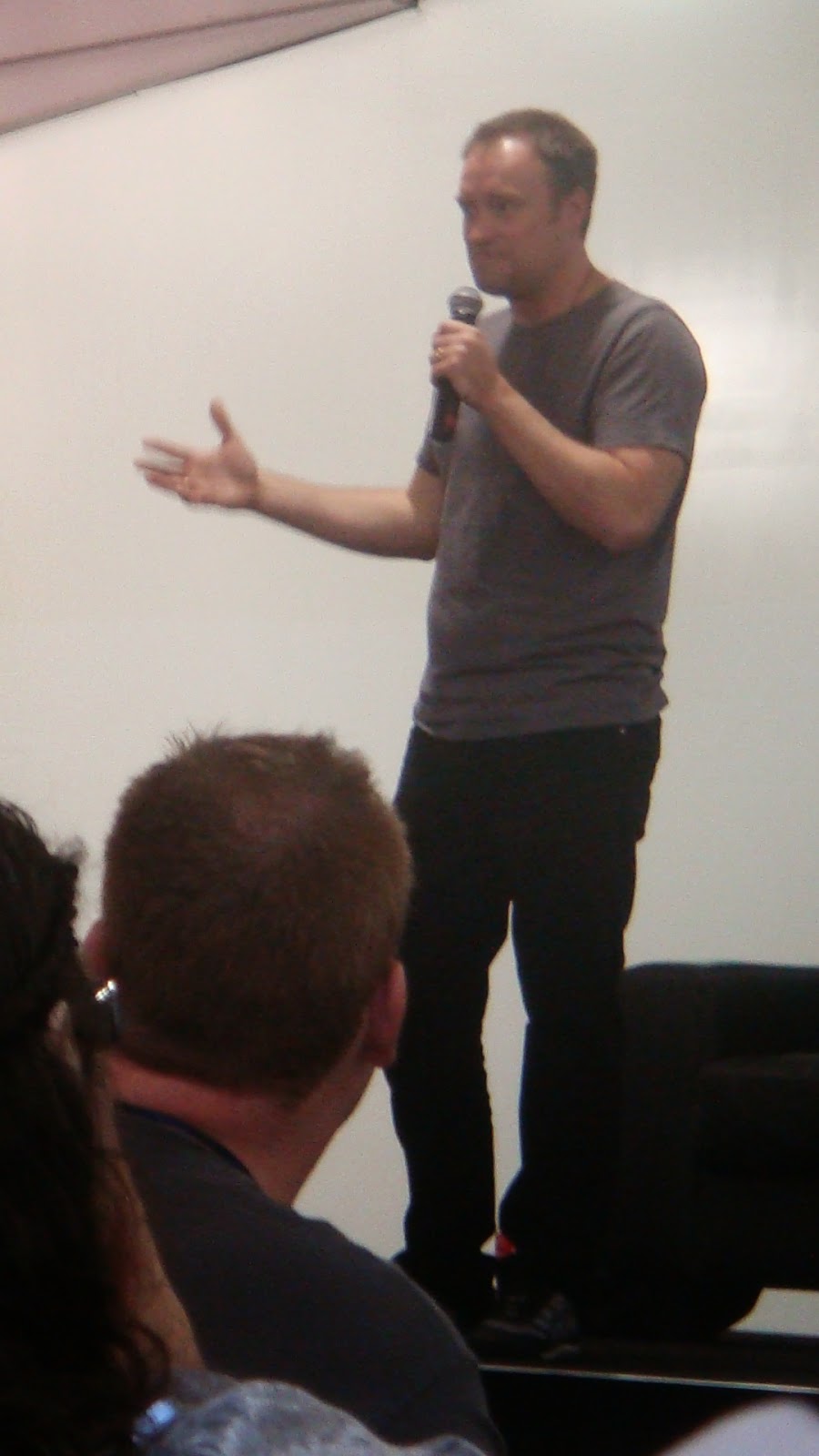 David's panel was absolutely hilarious! I had prepared myself for him to be a jerk just in case the worst was true, but I honesty could not have even imagined how kind, sweet, funny, down to Earth and charismatic he is. And very much a family man also.

So interesting tidbits from his panel:
Then David Nykl entered because 'he thought David could use the help', he said. David N walked in front of David H and H said something about being taller than him, I think. 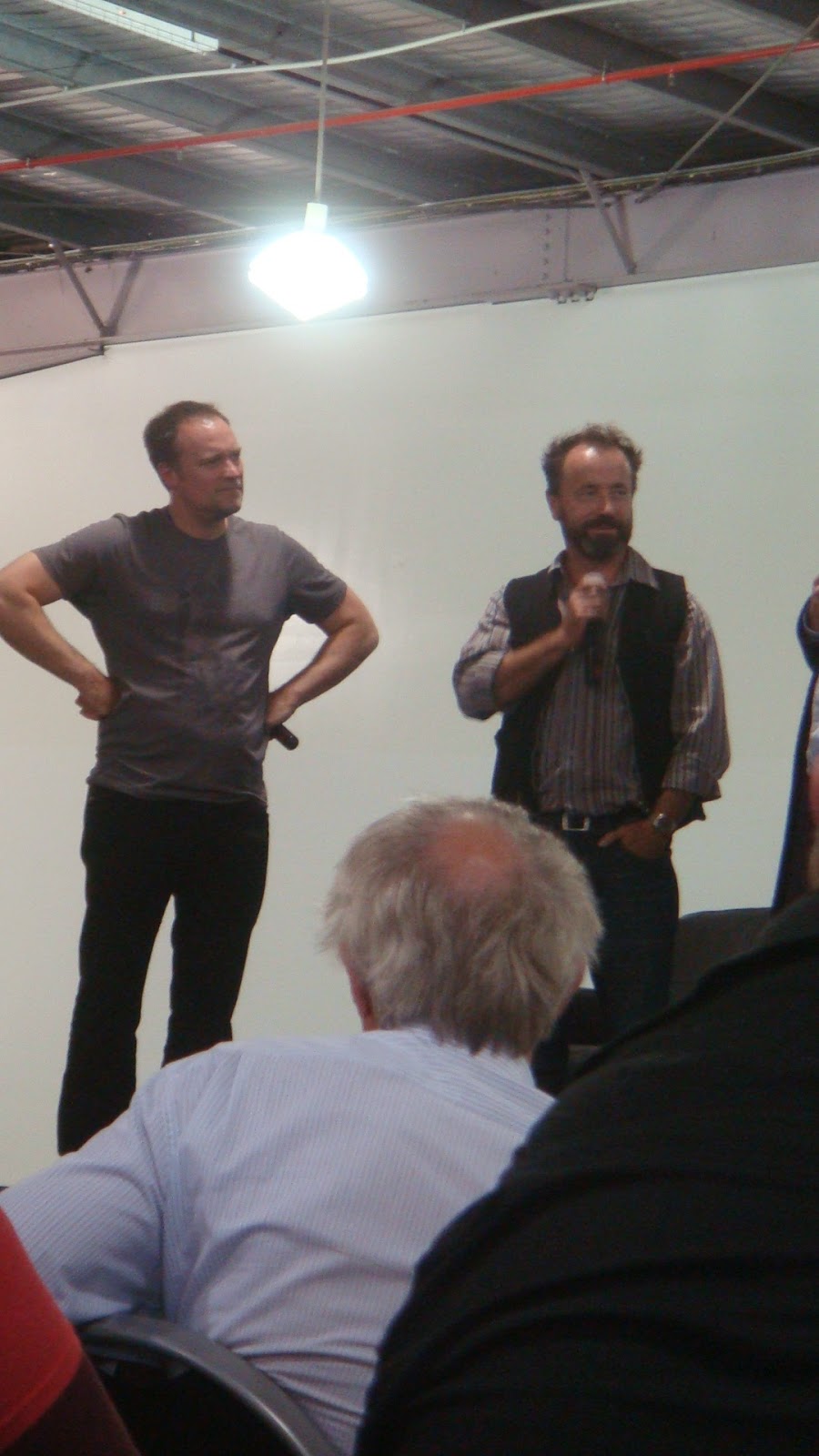 I liked the two David's together. It was a fun panel.

So more interesting tidbits from his panel: 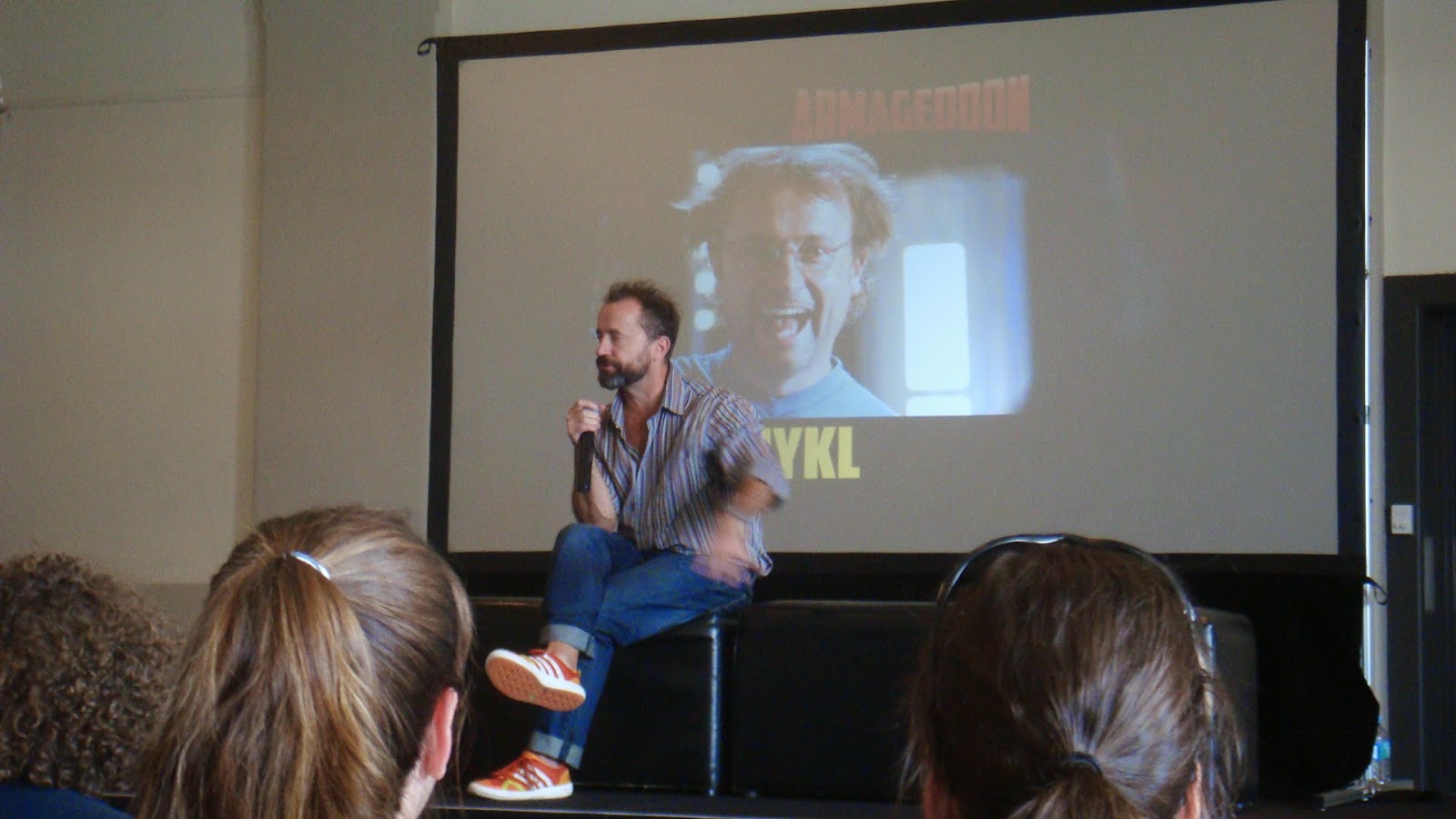 After David's panel, we rushed off for David Nykl's panel. I felt so sorry for him because the SG1 group panel was on at the same time so most people - having just seen David N in David H's panel - went to that one instead. So David N's attendance was very low than it deserved to be.

So interesting tidbits from his panel: 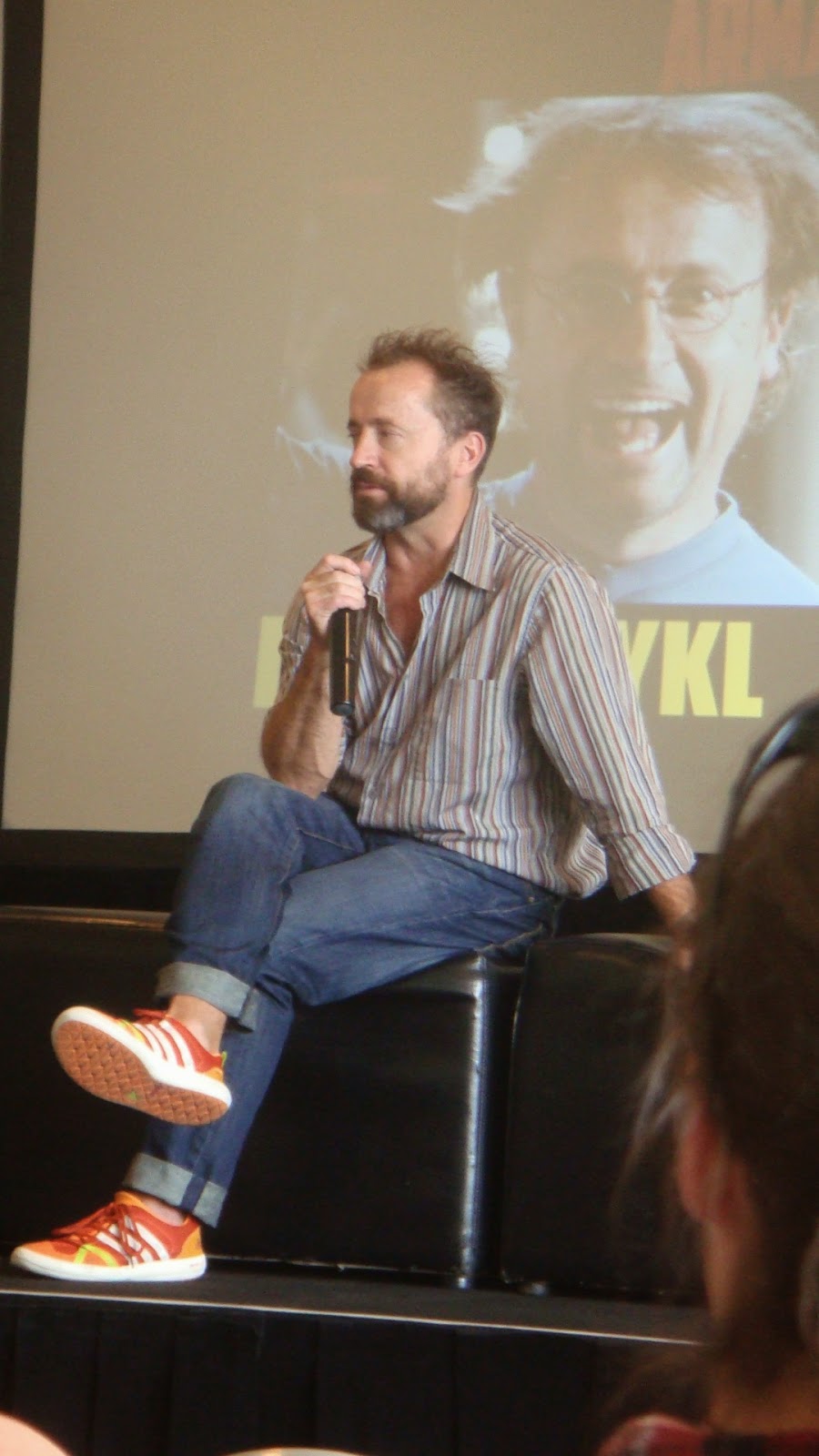 David's panel finished a little early so we had a little time to spare. We headed to the photo/autograph section. I had some time before my photo so I lined up with my friend who was getting an autograph from AJ Buckley. I could see that David H was still signing so I knew his photo session hadn't started yet.

After signing with AJ, I headed to David's queue. I wanted to be last in line and I was :) Woo! We had a very very brief chat. Very brief. But then I had to go around the corner and get my photo and David Nykl walked past. I said, 'David Nykl's in the house' and raised my hands to the sky. And he responded something positivity. Strangely, it was the highlight of my day lol.

Afterwards we headed to the screening on Debug. But that is for another post as I feel like it deserves its own blog post. I have a tonne of information I want to share about it! So stay tuned for that this week!