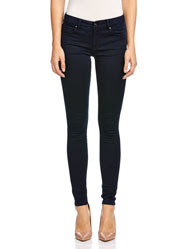 Something you should know about me - I've never owned a pair of jeans. Rarely do I even wear pants. I used to have a pair of striped pants (they were my sisters) and I have numerous pairs of leggings, but jeans have always been that scary unknown as there is just too many different styles and colours that it is all so overwhelming.

But recently, I've been thinking about how badly I've wanted to try a pair - but where to start ... the first thing I did was go into Just Jeans, Jeans West and Jay Jays to ask the sales assistants for help. Both asked what kind of styles I like and I honestly have no idea. I like bootleg. I like skinny. I like ripped. I like cropped. I basically like everything but I'm not sure what would suit me. I was a tough customer, so we decided to start at the beginning - meaning, try on a little of everything.

Turns out bootleg isn't around so much, so that was kind of a bust. The tomboy/ripped/boyfriend/girlfriend style looked ridiculous on me - I felt SO uncomfortable. It is more of a loose, carefree, relaxed style - and that's not at all me. Cropped styles looked okay - but as I am short (at 5'3) all the ankle length jeans hit my foot and that also meant knee length rips fell past my knee as well, so that wouldn't do. Straight leg looked flattering on but I wanted tighter.

But I found like I liked skinny styles on me best. They were more fitted (obviously) so they made my legs look very skinny but more so, they have the look of leggings (which I'm used to) but in a jean. They comfiest jean was the Super Skinny Jeggings from Jeans West - which I'm unsure if they actually count as a pair of jeans at all, but I found them a good compromise for this non-jeans, legging-wearing girl. They've got a heap in store ranging from $19.95-$49.95, so perfect for a first pair - especially if you're unsure how likely you will wear them or if you'll go back to your trusty leggings.

Another thing they asked about was colour. Obviously colours vary - but dramatically. Ones light denim won't be the same shade as another, so you've got to try on colours. I tried on dark blues, mid blues and light blues of all hues and shades. There's also prints, blacks, whites, colours etc if you're after something other than your traditional. Darker shades are the most universally flattering but I also liked the very light hues as well. The lightest ones I tried on had some colour variants going through it, so it broke up the shade as well - it's hard to explain, but I liked the gradient.

Also another thing is the rise length. Some sit lower on the hips, some are mid, some are high. I didn't have much of a preference so I tried them all on. I found mid rise to be the most comfortable on me because it gave some coverage but I could still sit down comfortably. It also didn't leave a muffin top which of the shorter styles did. Basically, you've got to try on to know.

The moral of the story is to not be scared to try something you've never tried before. You may surprise yourself. One thing I learnt was that no matter how shaping, butt lifting or anything like that a jean says, it can't work miracles. I don't have a butt and I never will - no matter how much lift they say they have. My thighs will remain the same size, no thigh gap and the tummy tucking, well, that's just not for me but I have a better understanding of jean shopping now, which is good. I know my size - go for your regular skirt/pants size. I'm usually a 10-12 in skirts, so I found I was an 11 most of the time in jeans (except the tighter styles with belly control I had to size up).

The biggest advice I can give is to choose a jean that not only fits perfectly but don't buy jeans that are too long. If they're too tight or loose, you can always size up or down - but if they're too long, you're going to have to get them altered and that costs extra money. So while you make thing you're getting a bargain, that may not be so with altering.

Good luck on your jean hunt - it's a doozy. But rewarding at the end. Try on many styles and you'll get there in the end! The best jeans I found were Mid Rise Second Skin Ankle Jegging from Just Jeans, Livia FREEFORM 360 Curve Embracer Skinny 7/8 jeans ($129.95) by Jeans West and The Show Off ($49.95 - available in five colours) by Jay Jays.