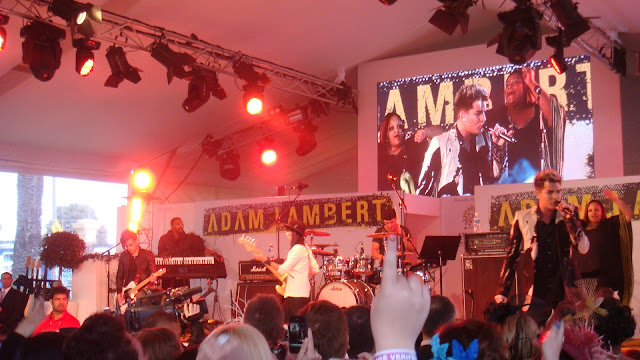 Spring Racing kicked off today with Caulfield Race Course hosting the Guineas Cup. The day is never as crowded as the ever-popular Caulfield Cup day but with special guest Adam Lambert performing after the last race, he drew in a bit of a crowd.

I arrived around midday, met my friends and we went inside. This was my first time to Guineas. I was going to attend Caulfield Cup this year - as I did last year - but when I heard that Adam was performing, I decided that I'd rather kill two birds with one stone and go to Guineas.

I spent the day socialising with friends, drinking and eating. I would have liked to see a bit of the fashion stakes but perhaps next time. I'm also not much of a tgambler. It would be different if I could pick a winner but as I usually always end up loosing my money, I didn't bet this year.

My friend and I went to line up for Adam an hour before he was scheduled to come on stage. There was already a crowd in wait so I was a little further from the stage than I wanted but there wasn't much that I could do ... lucky my camera has a good zoom :) I was being pushed, poked and could hardly move but hey, I guess that's all part of the fun. Shortly before his performance there was a huge uproar of screaming. The crowd all turned and saw Adam slowly walking towards the stage. He waved and smiled before disappearing backstage.

Ten minutes later, Adam ran onto the stage kicking off (pun intended) his set with the dance number Kickin' In.

Adam said how colourful and fashionable we were all dressed (it's tradition that the men wear suits and the females wear pretty dresses). A girl in the front row started crying and Adam said how lovely she looked (She lost her marbles. It was adorable.) He asked if she 'needed a fan?' Then joked saying, 'there's fans all around you'. He laughed and apologised, citing that his jokes are terrible.

I remember he asked if we liked Trespassing and said that it was his latest single.

For Outlaws of Love he described how he wrote this song about how everyone should be treated the same not matter their age, sex, sexual orientation, race etc. He sat down and the mood got very somber and heartfelt. It was beautiful - a little like Whataya Want From Me, except that he wasn't sitting down when he sang that.

He said that he's horrible at intros. He asked, "What now?" Someone in his band said, "Naked". So Adam said that they were all going to get naked. Then he remarked he was joking but the audience were allowed to get naked if we wanted to. Then someone threw up a hat to which he said he needed for Trespassing. He gave it to his lead guitarist (I don't know his name but only his face) to wear throughout the set - as Adam 'didn't want to mess up his hair'. Next a pair of yellow and black striped underwear and a batman bra were thrown on stage. He passed the bra to his band member, saying that she could wear it. Adam checked and said that the underwear were just his size. He said that it's good that he was getting all his shopping done and if we had any other items of clothing that we didn't want then we should throw them on stage. Shortly after a pink bra was thrown in his face. He said that it's not yellow so he couldn't accept it, before smiling and saying he was joking. He put the pink bra on the front of the stage and said, 'it's quite a generous cup size, which is good. Nice.' Then he sang Naked Love.

At one stage, Adam left the stage and one of his back up singers were trying to get us to sing. I can't remember the song but she had a lovely voice. There were also some other cover songs but I can't remember what they were either as he only sung snippets. I'm going to try and find video footage on YouTube to help me remember the bits I've forgotten.

He asked how many of us were from Melbourne - many hands went up. Then, New Zealand? There were some screams from the audience. The US? A couple of hands went up (his back-up ladies cheered). Adam asked if they had travelled just for the show but the audience member explained that they know lived in Melbourne.

If I Had You was definitely a crowd favourite. It was one of the songs that people danced more to and sang along too.

Other songs he sang were:
Chokehold
Cuckoo
Never Close Our Eyes
Pop That Lock
Shady 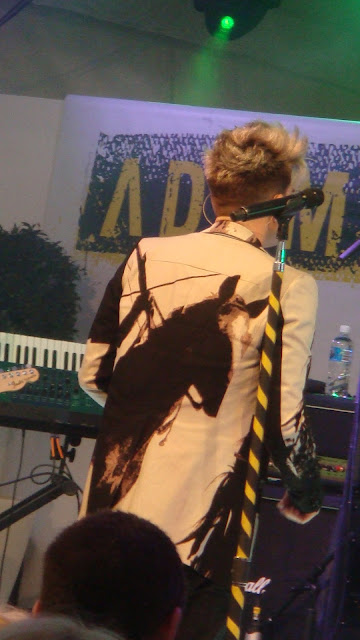 During the encore he introduced his band and then he was gone. A lot of people were waiting around afterwards - no doubt for a photo or autograph. I probably would he waited if there weren't so many people about. I will meet him one day - probably at a signing - but for now, it's not meant to be and I'm okay with this.

I wish I could remember more banter. It will most likely come to me during the two-ish hours it usually takes for me to fall asleep. I'll update as comes. All up, it was an amazing hour long show. He really knows how to work a crowd - he touched hands, made us jump (a bad idea when we're all so close together), clap along to songs, wave, fist pump the air. He made us dance, laugh, cry. I can't wait to see him perform again. What a powerful voice he has! I love when he dances. He's such a natural performer. His movements are sometimes sexual but other times just really in tune with the music. It's hard to explain unless you're a fan and/or seen him perform but if you've never had the pleasure of seeing him live, I'd highly recommend it.