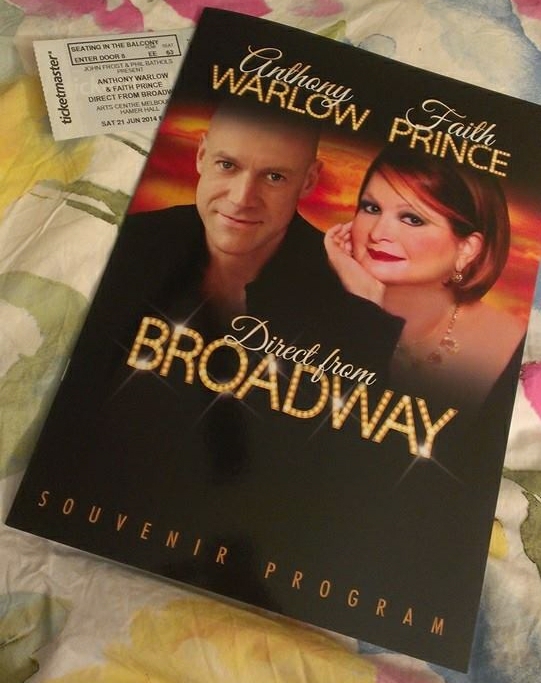 On Saturday 21st, I had the pleasure of seeing Anthony Warlow and Faith Prince on their concert tour 'Direct From Broadway'. I will be honest that I wasn't too excited to see them - I was in the beginning but the tickets I originally wanted to get were $450 which included a meet and greet. But I didn't have enough money to buy said tickets so I decided to get cheaper tickets. But then the $450 tickets went down to $189 and then further went down to $89.50. So I was pretty pissed off and that definitely put a downer on my whole spirit for the night.

However, I felt lucky to have at least had enough money to afford a ticket at all so of course, I still wanted to go. My plan was to wait at the stage door before the show and hope to get a photo with Anthony. But I decided to go drinking with my friends before the show instead. Do I regret it? No, not really. I would still like to meet him one day but it is odd how relaxed I am about the whole thing. It's not like me at all.

More details under the cut ...

I'm going off memory so some details may be incorrect.


The program lists the both songs as the set list:
(at the time of printing)

I know for a fact that some of this is wrong as the first song Anthony sung was Pure Imagination. He explained how his father took him to see the movie when he was a young child. And how he always loved the Gene Wilder version - not so much the Johnny Depp version. And how watching the movie, always makes him feel like chocolate - and he pulled a chocolate bar out of his jacket and gave some to people in the first row who came in late. He said "it's so hard to get here when you live in Melbourne, isn't it? (He lives in Toorak now) ... And I better not hear you opening (the chocolate bar)!"

My favourite songs were Soliloquy and the Annie Medley. I surprisingly enjoyed A Little Priest also. I had never liked that song in the Sweeney Todd movie but I very much enjoyed it on the night.

There was a part in the show where Anthony started the song as himself and then he sang the song doing all these impressions of famous people - I remember Marlon Brando for example. But, being of a certain age, I didn't really know who most of them were. He got a lot of laughs from the crowd though - so I figure he must have done a good job. Most of the audience were senior citizens. I was trying to weave my way around the theater but I would get into a good rhythm before getting stuck behind someone with a walking frame or stick. I think the guy sitting next to me was about 100 odd years old.

I also didn't like how much talking their was. The way it was worded felt very scripted and I've never been a fan of a scripted concert. I understand that it is often necessary - especially if the concert has a story or theme, like this one did. But it feels so disingenuous and I dislike that. I often thought sometimes that they must have been throwing around an original joke for our show only but then it would lead in to the next song. Still. That's only a minor dislike on my part. It didn't make me enjoy the show any less, I'm just rather picky.

I was surprised at how much I didn't mind Faith Prince. She is very much a performer - as in, I felt like she was putting on a character for most of the time when she was meant to be performing as herself. Still I liked her. I had (and still do) wish the concert had been 100% Anthony, but I liked what she bought to the concert. The duets were quite fun.

Anthony has said of the concert, “We worked on this arc that is about relationships ... young love, middle-aged love, marriage, divorce, how people can change ... and then the second half is more about us as two individuals and then we come together again.” And it was a nice idea. But I felt like it was sometimes hard to follow. I understand that they were singing songs from Broadway - which I LOVED! - but often in the more theatric performances were dialogue was included. It was probably most obvious when they sang Sue Me. Because the song includes character names, it was a bit jarring to go from Anthony/Faith to character names. Anthony would call out 'Adelaide ... Adelaide ...' during the song - which are a part of the lyrics, but if you are unfamiliar with the musical or where the song comes from, it felt a little out of place. I still enjoyed the song but I sort of had a moment of 'oh, they are playing out character roles now'. Whereas if you compare it to Do You Love Me? which is a lovely duet from the musical Fiddler on the Roof, it is a sweet moment in the musical but as it didn't include characters, it felt more like they were simply singing a song, rather than a musical song - if that makes sense?

Soliloquy has always been one of my favourite songs on one of his albums, so I was excited to hear it live. It include character names but in a different context. As it is a man talking about the child he doesn't have yet called Bill - or if it's a girl, well that's in the later part of the song - which also had some dialogue, but it didn't feel so out of place. I guess it's hard to explain unless you were there but it was more like it could have been an inner dialogue of Anthony himself, and that's why it didn't feel so jarring, I guess. Still, I LOVE the song! And he sounded as good live, as on the CD. I was very impressed as to how easily he can evoke emotion like that. It was rare. He spoke a little about how he has a daughter and the song meant much more to him after having his daughter to the extent that it is very hard to get through that song without getting all emotional. He said he loves the movie but it is actually very dark - a theme he didn't get until he watched it much later in life. I am yet to see it - but I desperately want to one day!

I'm sad to say that I didn't like all the interruptions during This is the Moment/Music of the Night. He would sing a little and then stop and talk. I wanted him to sing haha. I adore Anthony and I think he's so funny and charismatic, but I would have rather he sung the song through and then stopped. I know of others who felt the same way - especially during Music of the Night which is such an iconic song for Anthony's career.

The funniest story was at the beginning of the night when Anthony was explaining how people always get his name wrong. There was a funny story of a man who came up to him at the airport and asked if he was Antony Warhol - and he explained that his name was Anthony Warlow - and the guy yelled back to his wife 'I told you it was Anthony Lloyd Webber!' He said said that his sister came to see him in concert. She was standing in the ticket line and the person in front of her asked if there were any tickets left to see Andy Warhol. The ticket person said that he was dead. And the lady said back, 'I knew he was sick but I didn't know that he was dead' (in regards to Anthony's battle with cancer)

All up though I enjoyed myself. I do wish though that I hadn't had four drinks before hand - and no food - as I could have been concentrated. But it is what it is. I would go see Anthony again in a heartbeat. Here's hoping for some songs from Doctor Zhivago next time!