EVENT: Once, a new musical 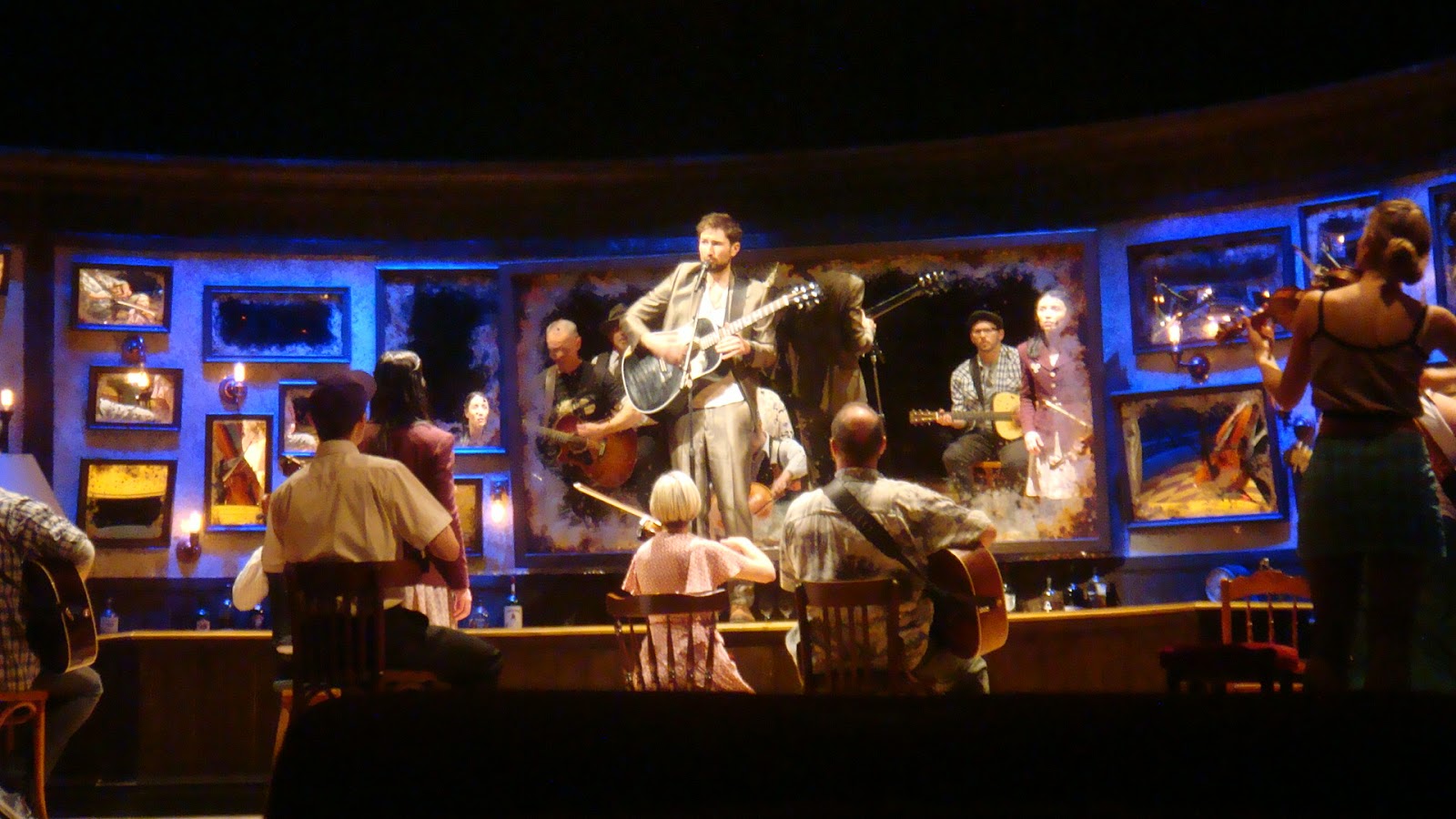 Firstly I want to thank Nuffnang, Valissa, Peter, Director John Tiffany and all involved for giving me the opportunity to attend a screening of Once - a new musical last Thursday night. As most of you may know, I am a HUGE fan of musicals. I've been seeing them since I was a kid (you can see the list of musicals I've seen here).

If you don't know the musical Once - it is a multi-award winning stage musical based on the Oscar-winning 2006 Irish film. The musical makes its official Australian premiere at Melbourne's Princess Theatre and runs from October-December 2014. Tickets are available for purchase via Ticketmaster.

As well as two tickets to the show, us bloggers were invited to the Media Call in the morning with other key media officials and the VIP party for Producers and Media during the show's interval.

Details under the cut! Plus my little 'meet and greet' with the cast of Les Mis and after party drinks. 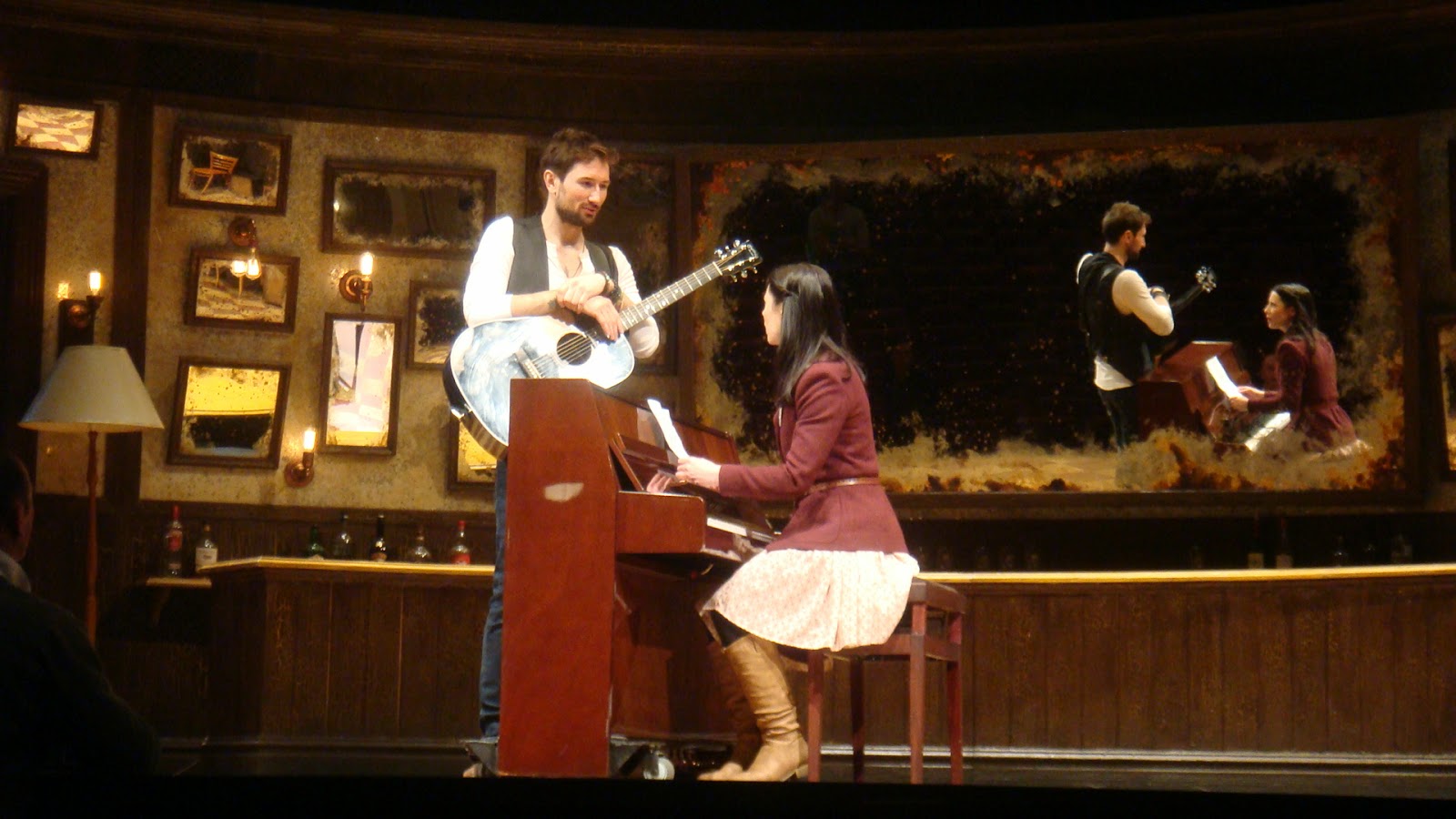 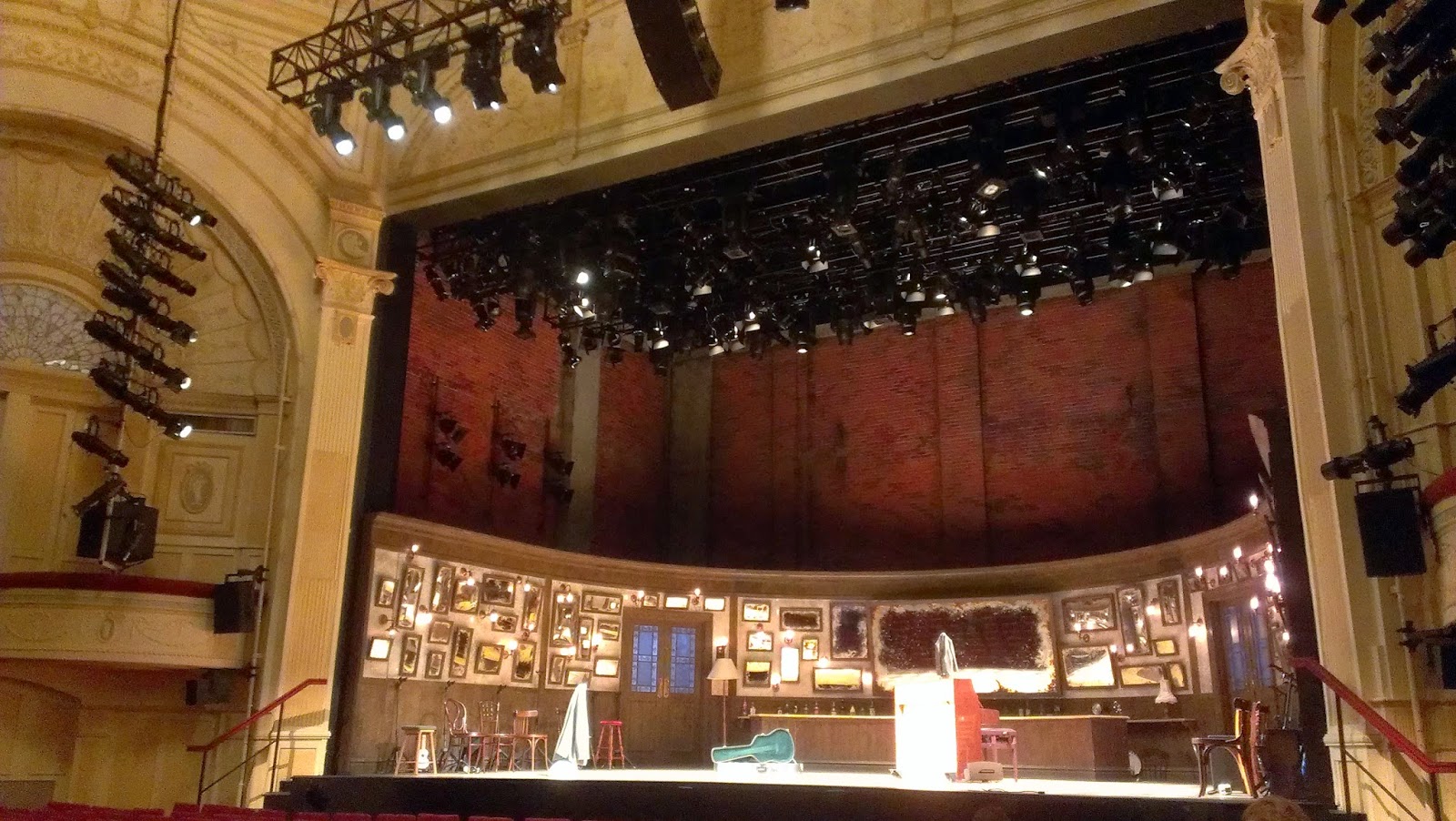 Firstly, how amazing is the set design?! I love the exposed brick wall. It feels so organic in design. It is not showy or flash in any way. It is simple, yes, but effective in every sense of the word. 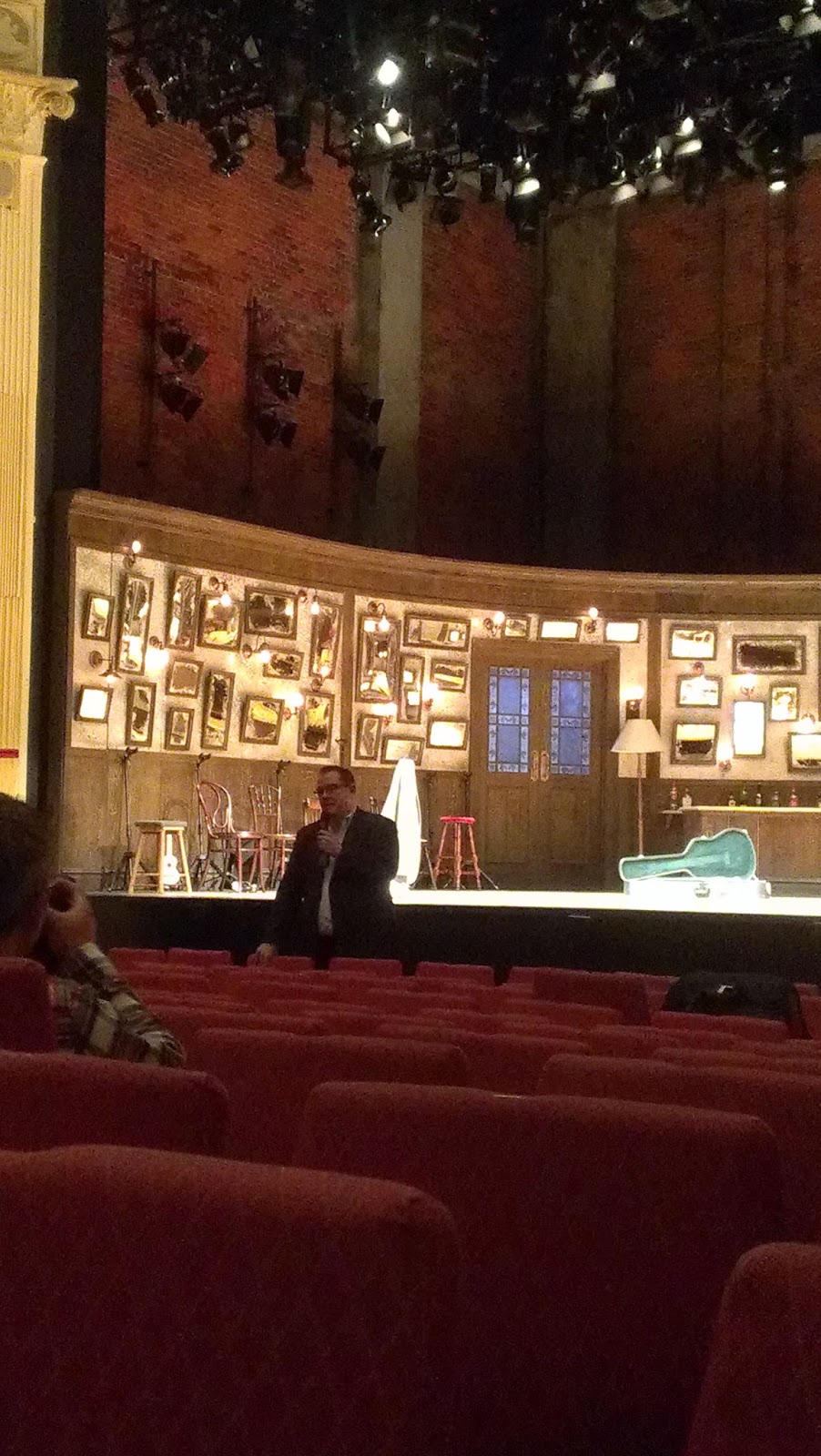 We were greeted by Producer John Frost (above) who told us that he saw the musical 18 months ago in London. Being the perpetrator of the recent revivals of The King and I, Grease etc he felt like the time was right to bring a brand new show to Australia. He mentioned that the word of month and feedback regarding the show during the preview period has been fantastic and there has been so much love given for the show.

John then introduced us to Tony Award-Winning Director John Tiffany; who was very happy to be able to give everyone a sneak peak of the show. He explains that the musical is based on the movie which was made with very little money but went on to win an Oscar for best song, then made its money back and then some. Above all else he described it as a musical, yes, but also a play about music and the creation of music.

The movie was particularly successful in Ireland but also New York, LA and San Fransisco - but said that even though not a lot of people had heard of the movie - they may have heard of the song - but it is a big risk of John Frost to have believed enough in the show (and hoped audiences would too) to bring it over and bring it to the amazing Princess Theatre for Australian audiences.

John and his creative team spent four years developing the musical - writing new music and arrangements for the stage show. He explained the it really is a new version of Once. Yes the story is the same. But the musical revolves around the brilliantness of the actors, what they give and their ideas. He said he has always considered it an acoustic musical which means it has to breathe like a tree; it has to expand and contract based on the people who are performing in it in order to connect with the music and the audience.

The audition process began last year (with John and John coming to Australia in February) and being blown away by the caliber of actors he met. Also noting how hard it is to play instruments whilst dancing - even though the actors make it look so easy. He hoped the actors and audience would connect to Ireland and pub music - and that's what the actors did. He said it has been an amazing seven weeks to work with the actors on the arrangements and for people to bring their own style and flair to the piece.
---

We were then treated to performances of Falling Slowly, North Strand and Gold. Please watch and enjoy the videos. Please forgive the quality of some moments. The clicking is from nearby cameras that I couldn't control. 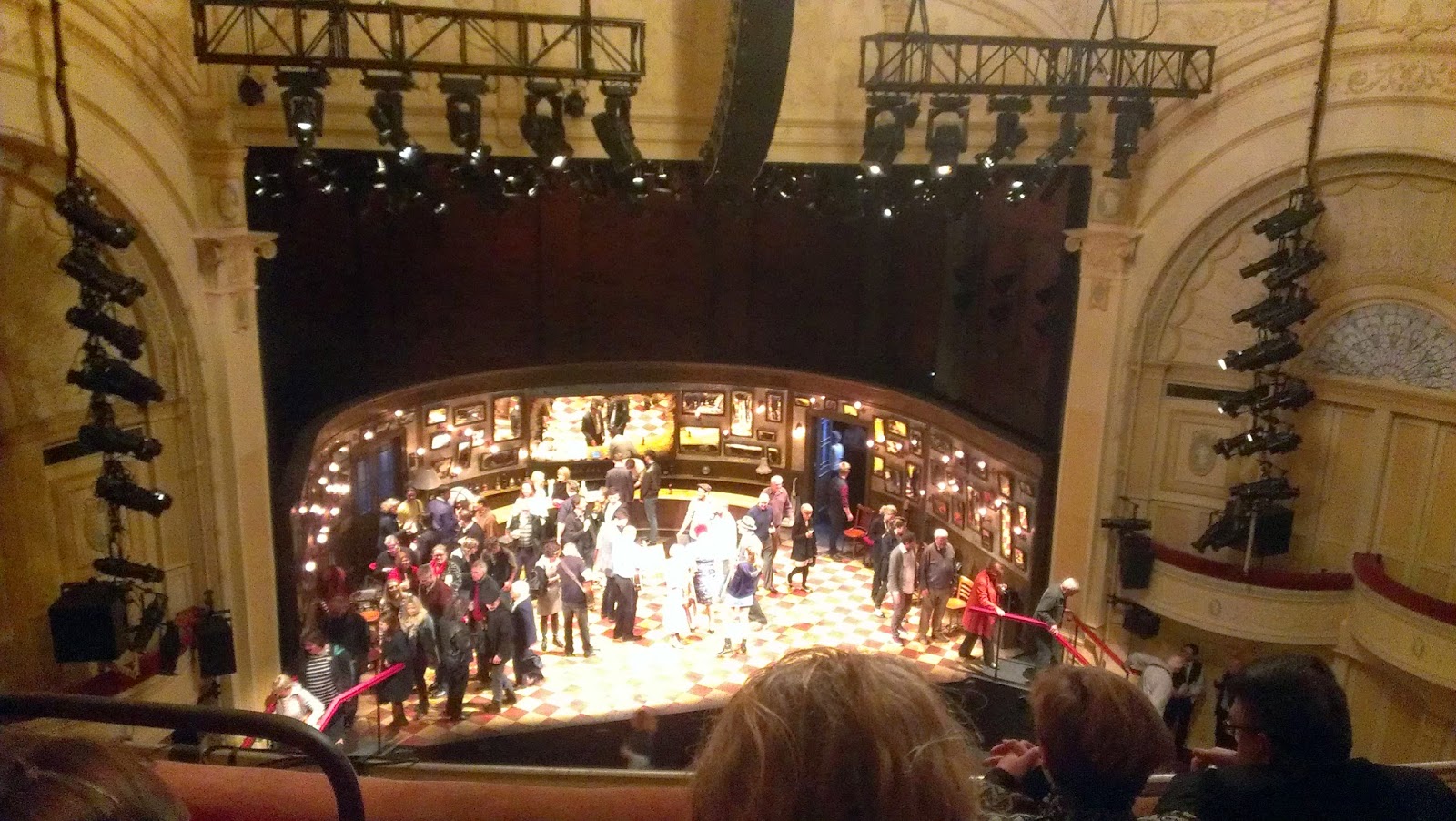 Before each show audience members are allowed to go on stage and interact with the characters in the pub environment. The actors perform a couple of songs with the audience around them. 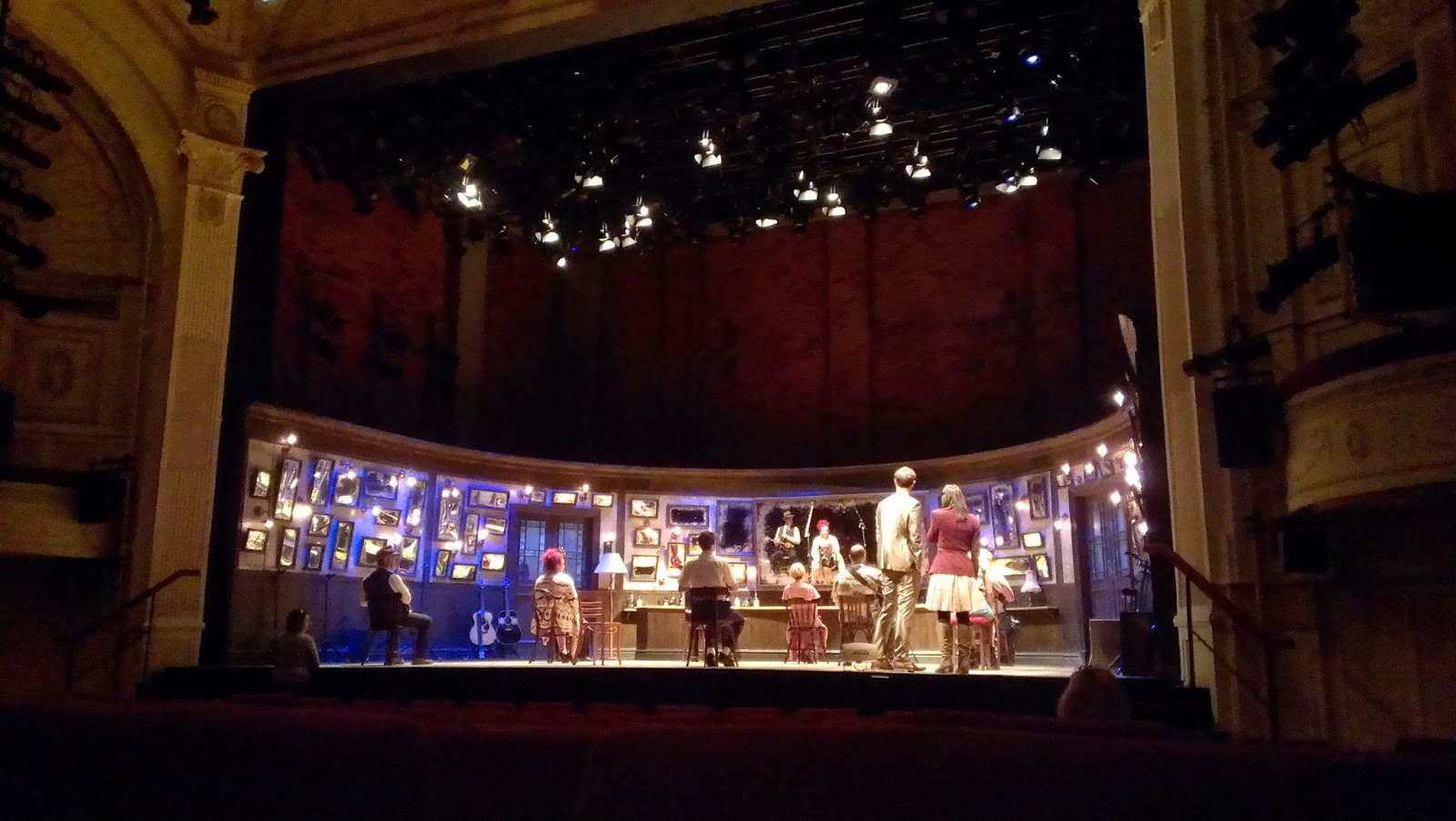 Knowing that I had tickets to the show, I didn't want to watch the movie beforehand. I wanted to go in cold not knowing the story, the characters, the music. Why?, I'm not too sure. I just felt like I owed it to the musical to go in fresh. I'm seeing Once again in two weeks. I want to watch the movie before I see the show for the second time because I want to see it with a different set of eyes.

But saying that, I have nothing to compare it to so how it compares to the movie version, I can't say yet. I can say that I absolutely fell in love with Anton Berezin who plays the Bank Manager and Colin Dean who plays Billy. I cannot even explain how funny I found the two of them - especially when the two actors played off each other. I also thought that Amy Lehpamer playing Reza was also a standout.

I'm not usually one who likes a show with no set and/or costume changes. To me, set and costumes play such a huge part in a musical that to have no changes is not in the spirit of a musical I usually like. However, in this instant, it actually didn't bother me - for the most part. I have been to other musicals (namely A Chorus Line) where this played a problem with my enjoyment of the show - but what Once does is keep it simple. It is a simple story with a simple set and simple costumes. It doesn't require anything else. The story keeps you intrigued and you root for all the characters which - in the end - is what a musical, especially one so pure, should be about.

I think they made good use of the set and making sure that the actors were utilized and somewhat hidden away in scenes where they should not have been there. They were merely - for the most part - blackened on the side of the stage.

This definitely goes back to the amazing performances of the two leads Tom Parsons and Madeleine Jones. My favourite song of the whole musical was The Hill followed by North Strand. I also liked If You Want Me. My favourite dancing was in North Strand and Gold. Also one cannot forget the line 'I'm always serious, I'm Czech' which takes the prize for best overused joke in the musical.

I'm not going to go into much more detail as I want to just encourage everyone to go and see it. You definitely won't regret it.


SPOILERS Highlight to read the spoilers below ....


I didn't like that the two leads don't end up together. What a downer. Reminded me of the sadness I felt at the end of A Chorus Line when not everyone gets a part. But this is just my personal opinion as I always like a happy ending and I don't feel like it was as happy as it could have been (which I would say is taken from the movie).
-- 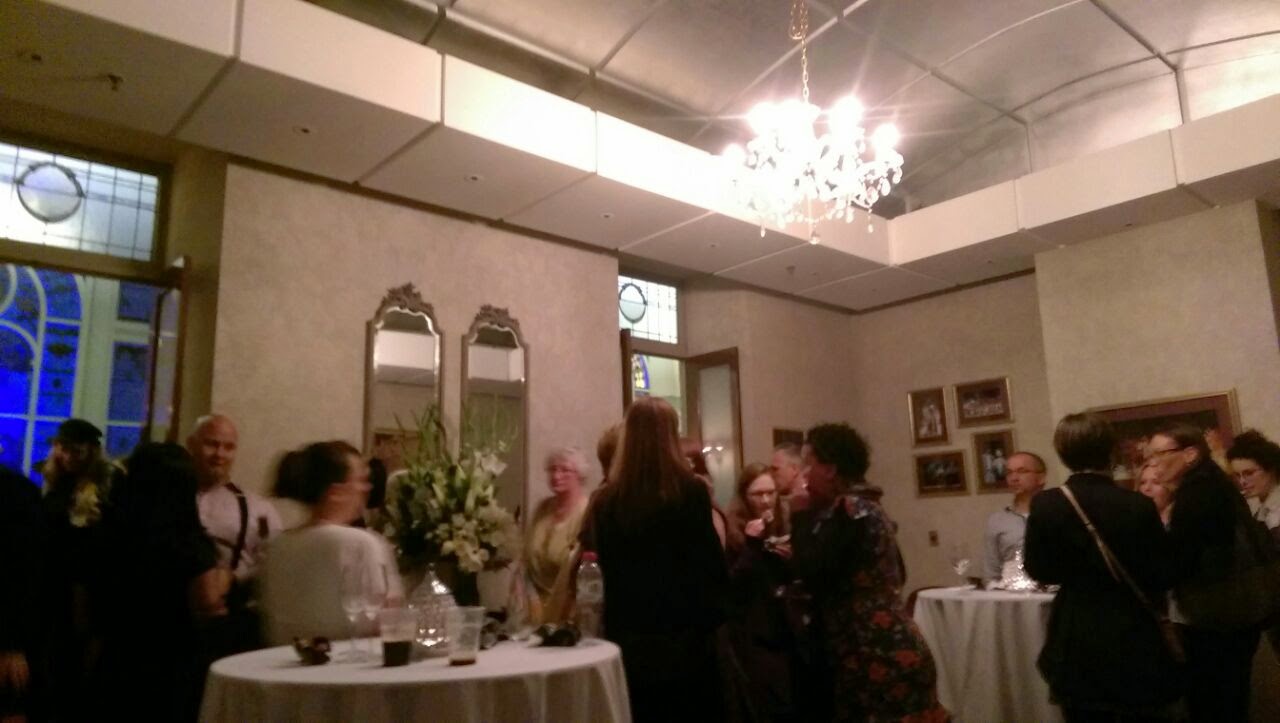 During intermission, the producers and media were allowed to enter the Marriner and Melba Suites for a drink and ice cream. Streets Magnum, get on it! So worth ruining my lipstick for :) And such an amazing way to mingle and feel like royalty half way through the show. Everyone in the room was having a most excellent (get the Bill and Ted reference there?) adventure (er) time! ;)

I only wish we had had longer to mingle and meet people. Such a great time was had! 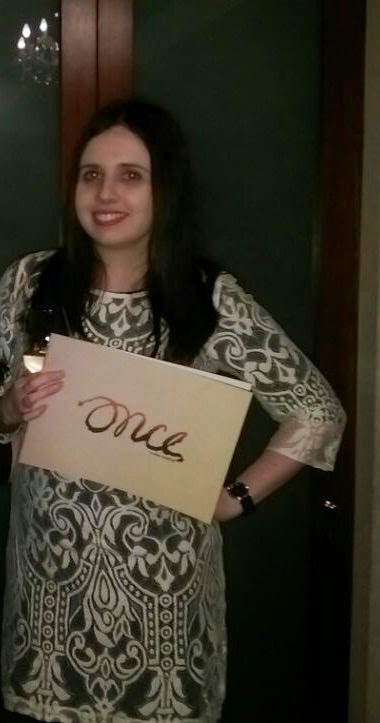 Dress by Portmans (as seen here) with black Supre layer underneath.
With Once programme $20 at the door.

I would have loved to have stuck around and chatted a bit more to the amazing bloggers who sat near me but alas, I had to rush off to Her Majesty's Theater and wait at the Stage Door of Les Mis (write up here). When I saw Les Mis I went to the matinee and was in a bit of a rush to get home after the show so, as I rarely come into the city, I wanted to take the opportunity to meet (and get photos with) three of the shows stars - Daniel Belle, Trevor Ashley and Hayden Tee.

Daniel was the first one out of the door. I told him that I liked him in Australian Idol - and not sure if he was embarrassed or not but he laughed and told me I had a good memory. To be honest, I don't actually remember him in Idol, I just remember that I liked him in Idol. It is funny the things we do and don't remember. Daniel and I look like a couple in our photo - it is pretty funny!

We waited 40 minutes before Trevor and Hayden came out together. Hayden was incredibly lovely! As Javert (who he plays) is my favourite character, it was so nice that he was such a sweetheart and I was so glad to have met him. He put his arms around me in the photo and I love it so much! He was dressed so well, smelt so nice and was carrying the most amazing Manbag/Murse I've ever seen.

Trevor was also a joy. I told him that I'm glad that he retweeted my tweet about wanting to have his babies because that is the highest compliment I can give someone when I like their work. He said that they would be the scariest babies! Later in the night I called him my 'Baby Daddy' ... not sure if he liked that or not haha.

After the meet and greets, we randomly found ourselves in the Les Mis/Once after party. When I say after party, I mean more of a pub that anyone could have gone into but instead most of the cast from both shows were there having a drink. I have to stay though, I've never wished I was an attractive gay man in all my life than being in that pub! Haha. But it truely was an awesome night - it was even worth coming back and finding our car had been locked away in the packing garage ... but that is another story for another time.

I hope you liked my write up.