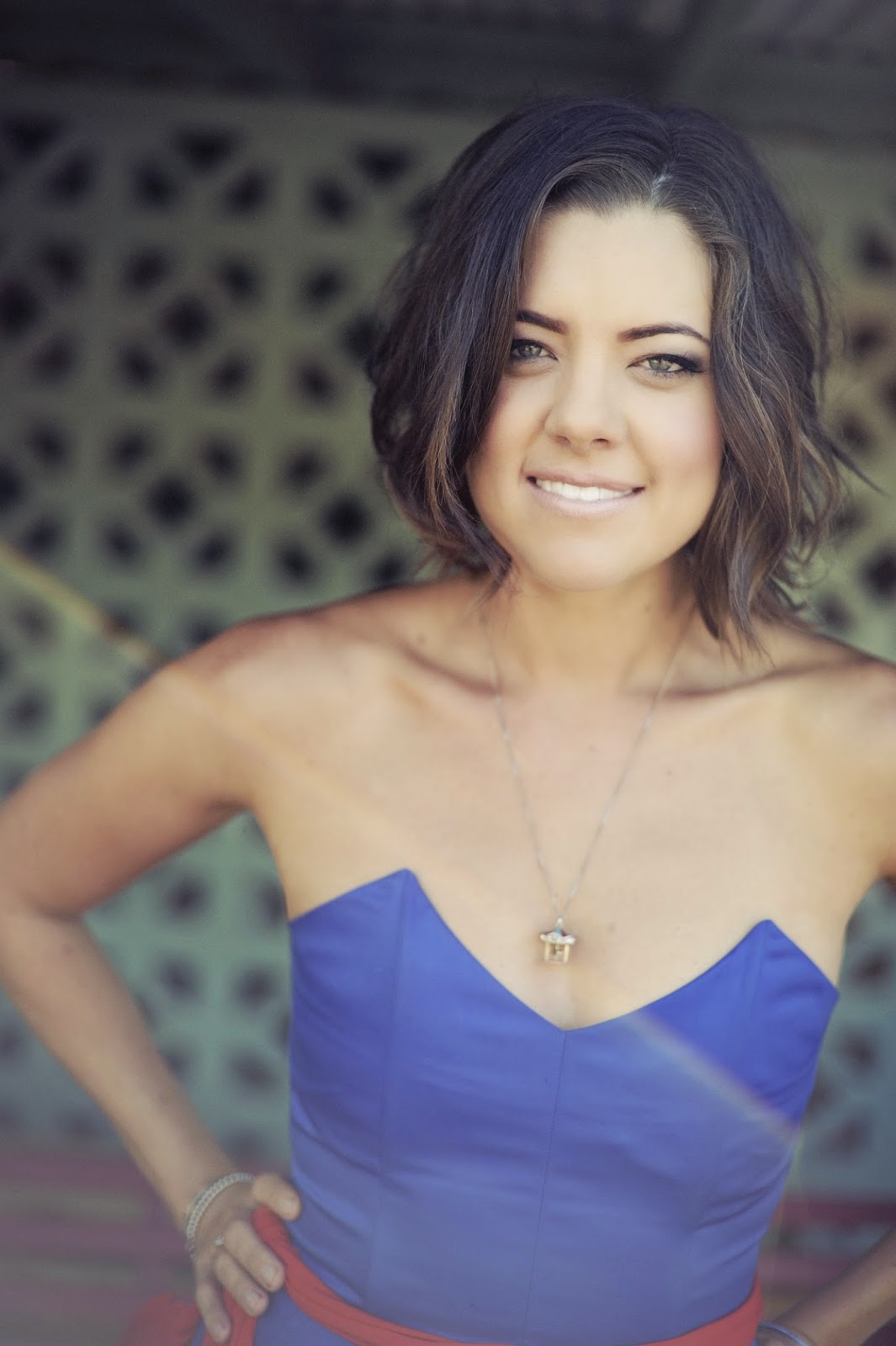 AN INTERVIEW WITH
Amber Lawrence

Firstly, congratulations on your Female Artist of the Year win at the Golden Guitars and CMC Female Oz Artist of The Year . Is it true what they say that it's an honour just to be nominated or are winners truly grinners?
Thank you very much! That was amazing! It's both actually. It's really an honour to be nominated but winning is pretty cool as well.

Is winning a fan-voted award are better than winning industry award?
To be honest, I wouldn't want to hand back either. The Golden Guitars has a lot of prestige and history associated with it [so] it's an honour to be part of history. And then, of course, fan-voted is crazy-exciting because what the fans say, that's what matters - that's what keeps our career going. I am extremely excited that enough fans wanted me to win that award.

The CMC Awards are premiering on Foxtel tonight. I know you did a little hosting - some backstage interviews. What can we expect to see tonight?
It's such a great awards show. We've got huge acts. We're got Lady Antebellum, Maddie and Tae, Kacey Musgrave, Lee Brice and some Aussies - Troy [Cassar-Daley] and Adam Brand. I don't know if they'll show any of my hosting on the TV but I hope so because I had a lot of fun. I guess they'll show me receiving my award and all the others so they'll be lots of glamour and great music. The only Australian performers on the night were Troy Cassar-Daley and Adam Brand.

You recently released your fourth full length album, Superheroes. How does it compare in relation to your previous albums?
This time around I had a record label. I had a lot of support and interest in the release - that's made it a difference. It's always been in the shops but this one they were able help out with some of the money that's required to market an album. That's pretty much why you want a record label because otherwise all the money comes out of your pocket. It gets expensive, so they've been really great.
It's been five months since the albums out so it's early days still but just having a big team that believes in me - that's been amazing as well - apart from the actual support marketing the album - just having people that believe in me and the album even more than myself sometimes. That's pretty cool.

Many people see a man with underwear on the outside and a cape, but what do you define as 'superhero' to you?
I grew up with a real life superhero. My Dad had a stroke at the age of 40 which made him fully paralyzed down the right hand side of his body. He was a superhero because he learnt to walk again. He never complained. He never said to anyone "Oh I can't do it". He would get up and he'd do his exercises every day, even as he battled cancer and the doctors had told him that he wouldn't survive it, he still did the exercises he had to every day.
That's a superhero to me - someone that takes what they've been given in life and, not even makes the most of it, but makes more of it and inspires everyone around them and never complains. And maybe not necessarily have to be injured or sick or anything like that, it's just some people are born lucky and others have to strive really hard for it - so that's superheroes to me.

Is it hard exposing yourself through song, or was it more liberating as a way of dealing or moving on with things?
It's funny when you go back and listen to songs and go, "Wow, I can't believe I was feeling like that at the time." I'm not feeling worried about sharing how I feel, my life or opening myself up - that part's easy. I think it's good to do as an artist. Everything we post on Facebook and Instagram and all that makes it seem like, "Oh what a wonderful life musicians have. Everything's perfect" - but then when you listen to the music, you're able to go "Oh hang, on a minute ... they go through tough times too - just like everybody else". That's what I like about being open and honest - not trying to fake it to put on a front. I'm really happy to share the ins and outs and the ups and downs.

A lot of people have found the personal lyrics and raw emotion in this album to be an inspirational one. Is that something that you expected people to get out of it?
I didn't know what people would get out of it when I wrote it. I wrote it for my own self really. And I'm an ordinary girl just like all my listeners. I felt like if I felt inspired by the songs then the listeners would as well. You write them from that perspective first and that's something that I heard Kasey Chambers say once. She doesn't write a song thinking about the listener in mind. She writes them for herself and if she likes them, if they resonate with her than then they're going to resonate with other people rather than trying than to anticipate what other people are gonna like.

You wrote/co-wrote all the songs on the new album bar one. Was there some nervousness that if the album failed the blame would probably fall back on you because you were so involved?
Oh for sure! But I would rather that. Sometimes you get advice [or] you don't listen to your gut or heart and then if it doesn't work out then I'm unhappy. But if I take my own path and my own gut instinct and it doesn't work out than that's just how it is. If you stay true to yourself, then I can stand by the good times and the failures as well.

I was reading your blog Following Your Arrow yesterday and I was really caught up in the parts about believing in yourself and following your dreams etc. And I think everyone in the creative field has their moments of self-doubt and disbelief. How do you keep that self belief going?
I think you're going to just accept that you're just gonna have to write it out sometimes. When you feel low and when you feel like it's not working, I'm failing and I'm a failure just let those feelings happen because the very next day you're going to feel fine again. That's sometime I've learnt - the highs and lows are part of being creative.
At the moment, I'm really happy and I'm really high on life and it's really hard to be creative. So if you look at it that way, when the self doubt comes in and the worry and the "down in the dumps" stuff - that's when you can kind of be creative. I've kind of embraced it.
Overwhelmingly, you've just got to have a balance kept in the favour of "I believe in myself" and for me that's just me trying to constantly trying to remind myself of far I've come and what my other options were. My other options were to stay in a corporate job that I hated and be sitting here now 10 years later in that same job perhaps going "I wish I could given singing a go". Who knows where I would have been and I'm lucky that I don't have that regret. I can sit here and go "Well I gave it a shot and this is what's happened." It's been good fun.

Was there a definitive moment when you realised "I want to do this"
Yeah. It actually was in 2007 when I was juggling two jobs and I just had to choose. I couldn't do both; It was just too hard. It wasn't a hard choice at all because it was more I was just trying to hang on to both for as long as I could but always, when push comes to shove, there was no way I was going to give up singing because it's a once in a lifetime thing, you take the chance. The most common thing people say to me is "Oh, I wish I could sing" so given that I could, it would be very unfair to everyone who wishes they could sing. [I was] given the ability to sing so I'm gonna go for it!

You first started off as an accountant before becoming a musician. Can you imagine what you life would be life if you were still working as an accountant, or do those days seem light-years in the past?
I think that's a different person! I don't like the thought of who I'd be actually. I'd be frustrated performer. I wouldn't be [wearing] fun little play suits and I'd be in suits all day long. [laughs]

Is one of the best perks of traveling so much that new city equals new shops to explore? Because, I'd totally see that as a perk!
Absolutely! Honestly, my subconscious tells me all the time that I have to buy new clothes because it's part of my job. It's not fair for audiences if I wear the same thing every day so  I'm always shopping and buying stuff. But I'm really good at it in terms of, that I don't really spend a lot of money.
People go "Oh she's wasting all her money on clothes." I'm really getting a bargain and finding some really well priced stuff because I only wear [things] a couple of times so I don't want to spend hundreds of dollars on anything.

You should get a stylist who can borrow clothing for you.
Yeah, I know. I've had that a few times but I always tend to really like the stuff so I want to keep it. I hate wearing something once and handing it back - it's very sad.

You must have a crazy full closet!
Yeah, I do. There's a bit too much in there. I'm a bit of a hoarder in the dress department. There's too many dresses in there that I don't wear anymore. I want to do a charity kind of thing - I don't just want to give them in a bag to charity. I'd like to sell them for maybe $10 each to people that have seen the dress on stage somewhere and all that money goes to charity so I'll work on that. I'd like to do something like that.

Lastly, is there anything you'd like to say to your fans?
Thank you for being part of the journey so far and it's really only just begun. Four albums in and another few good ones to come. And thank you so much for supporting me, voting for me and spreading the word. Music doesn't get played on the radio much so if you can tell a friend about my music, give a copy of my CD or something like that and find me some more fans, that'd be awesome.

For more about Amber, please go to www.amberlawrence.com.au/