INTERVIEW: Colin Dean from Once, a new musical 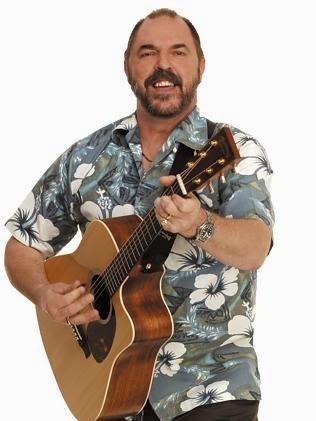 AN INTERVIEW WITH
Colin Dean

Tasmanian performer Colin Dean has been working in the industry for over thirty years. He is currently playing the role of lonely music shop owner Billy in Once, the new musical at the Princess Theatre in Melbourne. I spoke to Colin about dream roles, down time and art imitating life.

You're a well rounded performer - from acting on screen, singing and dancing on stage, being a tour guide, stand up comedy, live performances and more. Is there anything you can't do?
Make a decent curry. How do you get the lumps out?

You've been involved in a lot of musicals from Guys and Dolls to Les Miserables and even, my personal favourite Jekyll & Hyde. Is there one or a few personal favourites or career highlights for you so far?
Me and My Girl was my first major role, but the first time I played Billy's dad in Billy Elliot at the Capitol Theatre in Sydney will be hard to beat.

If you could play any role in any musical, what would be your dream role?
Sweeney Todd. I played the role in an amateur production but would love to play it on the big stage.

Have you always had an interest in music and performing? Where did you love for the arts come from?
I remember making up little plays in primary school and my first public solo performance was sitting in a baby's bath singing rubber ducky in grade 4. My parents always had music playing and performed occasionally at Service Club fundraisers. I kinda liked playing let's pretend. School was all about music and performance, brass bands, jazz bands (and) orchestras. I played trumpet through college and in some cabaret bands. I helped out backstage for a few amateur shows and eventually ended up onstage. Got hooked on the adrenalin rush or live performance.

A lot of performers move to Melbourne or Sydney where there are a lot more acting and musical opportunities, whereas you are based in Tasmania. Do you think it has hindered or helped your career in any way?
I was a 9-to-5er who performed as a hobby and the odd bit of beer money. I never intended to make this a career. I was coaxed into auditioning for Billy Elliot and after gaining a role found it hard to go back.
My agents at Expression! Arts Management make sure I don't miss any opportunities. It makes the trip to auditions expensive though. TV and film is harder because you need to be available at the drop off a hat.

You're a freelance performer and freelancing comes with a lot of uncertainties. Has there ever been days where you had doubts about your career choice? If you weren't a performer what would you do, or could you not see yourself doing anything else?
I worked a 9-to-5 for thirty years doing theatre of an evening. General insurance underwriter, Hobart City Mission fundraiser and my last job was commercial business manager for Southern Tasmania at Telstra. Amusingly my first job was in a music shop selling pianos.  It's only been since 2007 that I have been full time freelance and so far I'm doing OK.  There is nothing else I can see myself doing now as long as the work stays mixed and varied.

You're currently playing the role of Billy in Once, a new musical. Had you seen the movie before you auditioned for the role?
No. I knew nothing of the story. I was excited by the opportunity to play an instrument as well as the usual stuff so thought I would give it a go.

Once is also unique as it gives audience members the opportunity to join the actors on stage before the show. Does this add an extra layer of performance to the show as a performer?
Yes it does. Breaking down the fourth wall can be daunting to some but the music is so much fun that having the audience all around you adds to the fun. I guess I've done enough audience participation stuff to know how to enjoy the interactions with the crowd on stage.

In the movie version of Once, your character only appears for a brief second on screen. Did you find that a blessing to give you creative freedom to make the character your own?
Yes. I mean the characters were well defined by the script but we were certainly able to give them our own personalities.

How would you describe your character Billy?
Lonely. He even says we're all a bit lonely. He makes up stories about himself to impress but they don't work. He doesn't do karate,  can't really dance and most certainly doesn't have Spanish ancestors otherwise he would know how to pronounce "Rioja".  I think he was married a long time ago and is now desperately lonely but always out of his league in the dating game. Frustrated by the economic climate and the slow business his shop does, he gets angry easy too and blames the system, of course, but really he is a softy.

The Producers mentioned the risk involved in bringing such an unknown show to Australia, yet Once keeps extending its season in Melbourne - are you surprised by how well the show is doing?
No, because although the actual show is unknown, it is a proven product in the UK and America. It had the awards and credentials to bring the audience and, of course now the word of mouth about the show itself has spread.

What is your personal highlight of being part of the show?
I just love the music and being part of such a talented and close knit cast. We have played together so much now, on stage and off,  that we know how each other thinks. When the show ends it will be like the band is breaking up.

You have one of the funniest lines in the musical - the one about Michael Bublé. Are you a Bublé fan yourself?
I am a big band and swing era fan. I perform with a big band in Tassie and as part of a Rat Pack inspired corporate entertainment package called Croon. I am definitely a Michael Bublé fan. Bublé  sings the standards as good as anyone.

I've heard a lot of actors like make slight changes to their performances each night. Is that something you do to keep the material fresh?
Definitely. Every time you say a line it has to be like it's the first time you've said it so small changes to emphasis and timing help this. Having said that you do learn after a while which delivery of a punch line works best so tend not to change that too much. I might add the director doesn't like too much change.

What is a normal week for you like when you're performing eight shows a week. Is there much down time or are you constantly working?
We get one day a week off. The other days (we) have some free time, although we tend to get together anyway and jam. There are always rehearsals for covers as well that we need to help out with.

When you're not working, what do you like to do in your spare time?
Watch movies, go for bike rides, go out for meals and play the mandolin - which I have now kind of mastered. I am away from home so sadly, there is no visiting friends and socializing with family.  The Once cast are my family at the moment.

Once will close in Melbourne in February. What is next for Colin Dean?
Follow me on Twitter (@ColinJamesDean) to keep in touch.

Lastly, is there anything you would like to say to your fans?
Thank you for coming on this journey with us and if there is anything you have always wanted to do and haven't - do it!  Also, if you are ever in Tassie, please come on my theatrical history tour, "Settlement Secrets" and say hello. Details on my website www.antipodeanentertainment.com.au

Once, a new musical must close on February 8th, for ticket details go to http://oncemusical.com.au
at 10:20 am